Press Release
[The Radio Times is] attempting to resolve one of the fiercest debates in cinema history in this weekâs issue: who is the greatest ever James Bond? And, as thereâs a good case to be made for awarding the title to every incarnation of 007 from Sean Connery to Daniel Craig, weâve enlisted some expert help in the forms of film buffs Barry Norman, Mark Kermode, Simon Mayo and Andrew Collins to settle the matter once and for all. 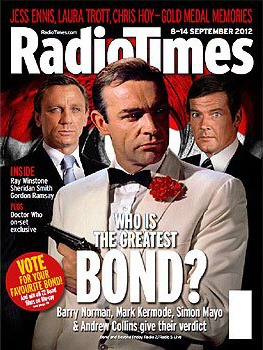 Plus, theyâre also giving you the chance to win each and every Bond film on Blu-ray! All you have to do is tell us your favourite Bond and the reasons you like him, and you could win Bond 50, a newly-released special commemorative box set containing all 22 films from Dr No to Quantum of Solace.

Itâs all in this weekâs Radio Times, on sale now priced Â£1.40.