English actor Ben Whishaw, who took over the role of Q in the record-breaking 23rd James Bond film "Skyfall", has spoken briefly about the timeline for work on the follow up.

Speaking after the BAFTA TV Awards on Sunday, where Whishaw won Best Leading Actor for his performance as Richard II in last year's Shakespeare offering The Hollow Crown, said of his upcoming schedule: "Iâm finishing off this play that Iâm doing in the West End and Iâm sure thereâs a couple of possibilities, but thereâs nothing definite yet. More Bond, but we donât even know when thatâs going to happen, you never know."

"Iâve heard some things, but I canât share. I thought it might be the end of this year but Iâm not sure anymore."

Whishaw is optioned for the next two 007 adventures, along with Naomie Harris (Moneypenny) and Ralph Fiennes (M). Daniel Craig's tenure as James Bond will also continue thought Bond 24 & 25. 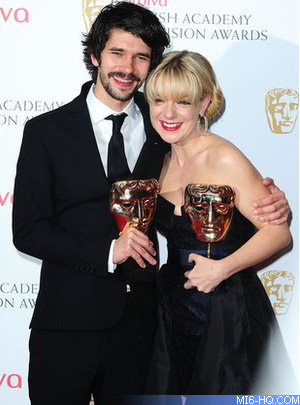 Above: Ben Whishaw with his BAFTA trophy and actress Sheridan Smith.