French actor Simon Abkarian was reported to have screentested for the role of the villain yesterday by AlloCine. Today French newspaper Le Parisien has confirmed he has been cast in the forthcoming James Bond film Casino Royale.

Movie site AlloCine reported Abkarian had screentested in London for the role of the villain Demetrius. Le Parisien has now confirmed that Abkarian was signed in favour of fellow French actor Michael Youn. The report also says that Romain Duris was first offered the part but turned down the role. 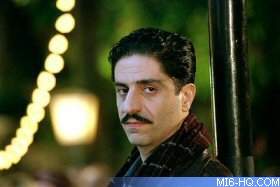 In other villain casting news, Le Parisien reports that Seydina Baldi - another French actor - has been signed up to play the villain's henchman in the movie. As well as his acting, Baldi is known for his martial arts skills.

Thanks to `Agent JM7` for the alert.