The British actress who appeared in Skyfall has died at 52

British actress Helen McCrory OBE, who played Clair Dowar MP in the 2012 James Bond film 'Skyfall', has died at the age of 52.

Helen Elizabeth McCrory was born on August 17th, 1968 in London, to a Welsh mother and Scottish father. After completing he education at Queenswood School in Hertfordshire, she traveled to Italy for a year. On her return, she enrolled at the Drama Centre London before making her stage debut in 'The Importance of Being Earnest' in 1990.

Many stage roles followed in productions at Shakespeare's Globe theatre. Her big-screen breakthrough came by playing Cherie Blair in 'The Queen' (2006) and 'The Special Relationship' (2010). In the 21st century, McCrory completed the hat-trick of the big British franchises with roles in Harry Potter, Dr. Who, and James Bond. 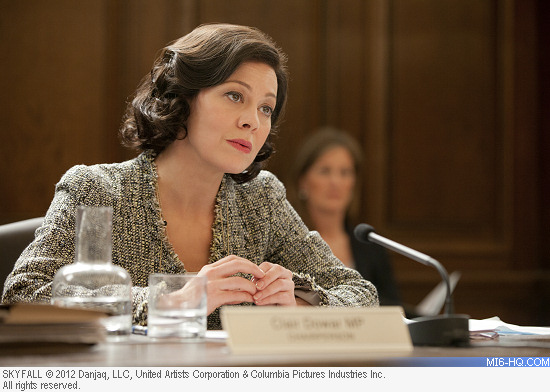 Her character Clair Dowar MP was the Home Secretary of the British Government and led the inquiry into M's actions during a security crisis that threatened the future of MI6. She escaped the attack on the hearing by Silva with the intervention of Bond and Moneypenny.

More recently, McCrory won a new legion of fans for her performance in the BBC series 'Peaky Blinders.' She was appointed Officer of the Order of the British Empire (OBE) in the 2017 New Year Honours for services to drama.

Helen McCrory died on April 16th, 2021 at the age of 52 following a battle with cancer. She is survived by her actor husband Damian Lewis and their daughter Manon and son Gulliver.  Lewis said that she died "peacefully at home, surrounded by a wave of love from friends and family."