Max von Sydow was born 29th April 1929 in Lund, Sweden. As a teenager, von Sydow and some of his friends founded an amateur theatre company, and later he attended The Royal Dramatic Theatre in Stockholm. In 1955, he moved to Malmö, where he met and began working with Ingmar Bergman, and his career really began to take off as he starred in Oscar-winning films produced by Bergman.

Von Sydow went on to since star in such classics as 'The Greatest Story Ever Told' (1965), 'The Exorcist' (1973), and cult hit 'Flash Gordon' (1980). He appeared more recently in blockbusters such as 'Minority Report' (2002), 'Star Wars: Episode VII' (2015),  and the popular TV series 'Game of Thrones.'  He was twice nominated for an Oscar, first in 1989 for Best Actor in a Leading Role in 'Pelle Erobreren,' and then in 2012 for Best Performance by an Actor in a Supporting Role in 'Extremely Loud & Incredibly Close.'

Using his rights to 'Thunderball', Kevin McClory made the unofficial Bond film, Never Say Never Again, starring Sean Connery, in 1983. McClory cast Max von Sydow for his head of SPECTRE. Again, the white cat was present, but this time, Blofeld’s appearance is reminiscent of the version first intended with Jan Werich, with grey hair and a goatee. 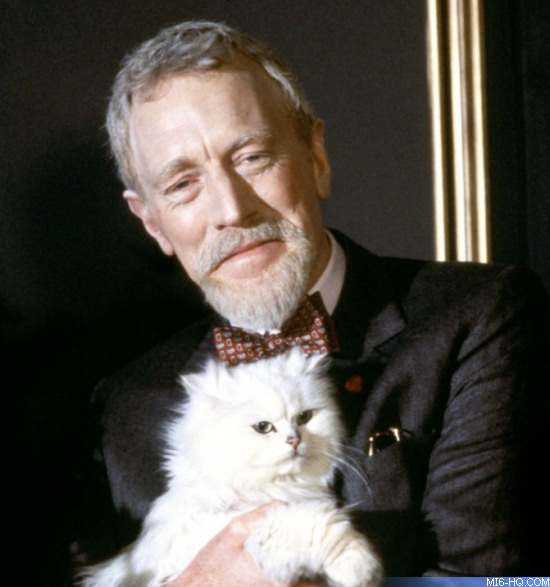 Producers of the official franchise originally asked Max von Sydow to play 'Dr. No', but he declined that offer.

Besides portraying Ernst Stavro Blofeld in Never Say Never Again, he also has the distinction of having worked alongside at least three previous Blofeld actors. First, he co-starred with Donald Pleasance in 'The Greatest Story Ever Told' (1965), then he played alongside John Hollis in Flash Gordon (1980), and finally, he worked with Telly Savalas in the made-for-TV movie, Kojak: The Belarus File (1985).

His family announced "with a broken heart and infinite sadness" that Max von Sydow died on Sunday 8th March 2020 at the age of 90. He divorced his first wife Christina Inga Britta Olin in 1979, and in 1997 he married the French film-maker Catherine Brelet, and they settled in Paris (Von Sydow became a French citizen in 2002). He is survived by Brelet and their sons, Cédric and Yvan, and by Henrik and Clas, the sons of his first marriage.