Filming the opening credits sequence for 'SPECTRE' on Monday 30th March 2015 focused on a spectacular aerial stunt to be performed by two doubles high above Zocalo Square in Mexico City. Experienced stunt pilot Chuck Aaron, who is the only helicopter pilot in the world licensed to perform 360 degree rolls, started test flights just before 9am. An hour later, director Sam Mendes and the production crew assembled, and by 10:30am, all of the extras were in place. 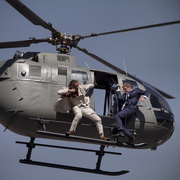 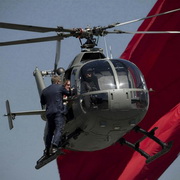 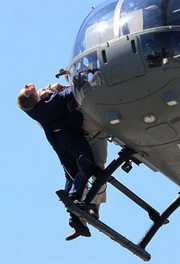 Mendes had to shout to the crowd of 500 extras "No one applaud! No one dances!" as the action took place above them. Several flights were made before the crew had a well earned lunch break at the Gran Hotel de la Ciudad de Mexico. Filming resumed just before 1pm with the helicopter performing acrobatics very close to the buildings.