Pulling Out All The Stops

Daniel Craig talks about his approach to No Time To Die

Daniel Craig gave an interview to the Sunday Times that was published in the paper's Culture magazine supplement today. The three key takeaways: He was always signed to do Bond 25 (something he confirmed back in a 2012 Rolling Stone interview), everything is being thrown at this one, and he is approaching it as his last.

The interview was really to publicize his new non-Bond film, the 'whodunnit' mystery 'Knives Out,' which is released at the end of November in the UK, but as always, a large number of the questions were around his fifth, and probably final, 007 adventure.

"Every day has an intensity to it. We’re trying to make the best fucking Bond movie we can. Pulling out all the stops. If we aim for the stars, we might hit the treetops.”

Asked why his non-Bond output has slowed a lot in recent years, he explains: "...by the time I’m finished with [a Bond film], I just need a break, and I’m very much about being at home. This may be hard to believe, but I love the fact I’m Bond. We’re in rare air, making Bond movies. It is one of the most intense, fulfilling things I’ve ever done, but it takes a lot of energy and I’m getting old. I’m getting creaky. And so what I do outside of that has got to be really good." 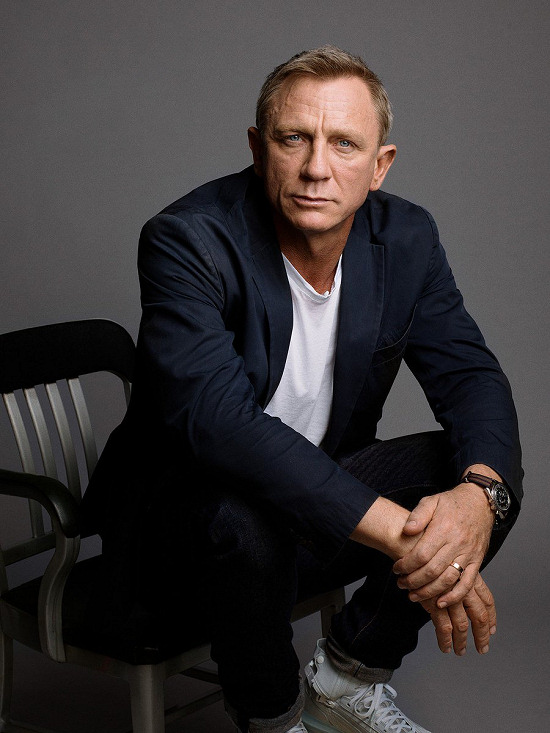 One of the early 'water cooler' discussions about - what is now titled - was bringing Phoebe Waller-Bridge on to the writing team. Craig confirms it was his idea, but would not spoil any surprises. "You’ll have to wait and see! But she’s just brilliant. I had my eye on her ever since the first Fleabag [TV series], and then I saw Killing Eve and what she did with that and just wanted her voice. It is so unique — we are very privileged to have her on board. She has been asked many times about what she is going to do, and her answer is that we’re not really going to change anything. He’s James Bond. But, of course, it’s a different angle to come at ..."

"Look, we’re having a conversation about Phoebe’s gender here, which is fucking ridiculous. She’s a great writer. Why shouldn’t we get Phoebe onto Bond? That’s the answer to that. I know where you’re going, but I don’t actually want to have that conversation. I know what you’re trying to do, but it’s wrong. It’s absolutely wrong. She’s a fucking great writer. One of the best English writers around. I said, ‘Can we get her on the film?’ That’s where I came from."

Craig said he wants to continue finding different 'oddball' roles in the future, and will probably look at a return to theatre as his home is New York City now, but what will he miss most about Bond? "I’ll miss my friends. I’ve worked with many of these people for 15 years now, and that will be a real jar. I’ll see them again, but this is a special atmosphere, on a Bond set."