Weather hampered the first day of location shooting for the new James Bond film 'SPECTRE' in Altaussee, Austria, today. After a cold, snowy and windy morning, the sun first came out in the afternoon, but by the time the cameras were ready to turn, fog descended on lake. Avalanche blasting also had to be done in the morning due to the snow fall.

Despite the bad weather, Daniel Craig was in good spirits and signed autographs for three young fans who came out to watch the proceedings. One didn't even have any paper ready, so Craig signed a 10 Euro note.

"Filming is currently not possible as we have extreme wind on the lakeside meadow where central filming takes place, also travel back and forth with the boats is difficult," said Enrico Jakob of CineStyria, the film promotion agency of the state. "Over the past ten years, we had 230 to 240 productions in the state, but James Bond is a highlight." 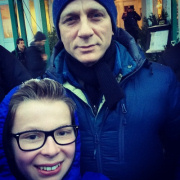 The weather had cleared enough by noon for the helicopters to begin practice flights. Craig was spotted on the banks of the lake in the afternoon, and then later the first shot of him standing on the wooden boat on the lake. The crew called it a day at 4:30pm as the light faded.

Conditions are expected to be better tomorrow, the second and final day for filming in Altausee, with temperatures forecast to be between minus 4 and minus 1 degree Celsius with a chance of further snow in the morning.