The Shorts: From Russia With Love

Intrigue. Suspense. Danger. Action. These are just some of the words that can be used to describe what makes the James Bond film franchise tick. Think of each film as a delicate house of cards. If one crucial element is not in place, the whole thing comes crashing down. However, certainly no one would ever dream of relegating 1963’s classic 'From Russia With Love' to this fallen pile. The film, as well as Fleming’s original 1957 novel, still stands as one of the strongest highlights of the series to date.

After the resounding success of 1962’s 'Dr. No,' the Bond team had no choice but to one- up themselves. Armed with a much larger budget, Albert Broccoli and Harry Saltzman chose Ian Fleming’s fifth novel as the perfect source material for a very atmospheric and different kind of 007 adventure. If you’re into a stolen cipher machine, a tunnel of rats, a fistfight on the Orient Express, and the first film appearance of Ernst Stavro Blofeld, then you’ve come to the right place. In case you haven’t heard “James Bond. That amazing, notorious, 'Dr. No,' secret agent is back, and half the world is out to kill him!” 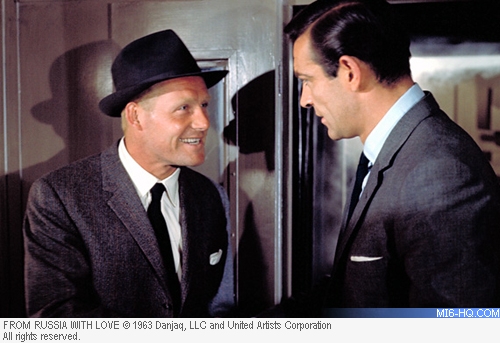 What follows is a pulse pounding trailer that shows you just about everything once the theater lights go down. From the historic locales of Istanbul to the gypsy camp, no action packed stone is left unturned. Normally in trailers, showing many crucial and pivotal scenes could be considered a bad thing. But this one is drenched in so much 1960s’s elegance that it seemingly works to its benefit. Very good cases in point are the numerous cringe worthy, but humorous taglines that are sprinkled throughout it:

“As he pits his murderous talents against the Iron Curtain…and its velvet women.”

It wouldn’t be a proper analysis of the movie if I didn’t invoke the name of SPECTRE! For this trailer, the villainous organization is back and more present than ever. While referred to in 'Dr. No,' it’s really takes a firm hold on the James Bond franchise in 'From Russia with Love.' You only have to look no further than Robert Shaw’s chilling introduction as 'Chief Executioner of SPECTRE.' Then, in case you forgot what SPECTRE stands for, the full unabbreviated title is splayed across the screen for no particular reason at the trailer’s end. Subtle this trailer is not! Surprisingly, for what the editors do show us they made a wise choice to keep Blofeld’s appearance, with white cat in toe, a secret. It just goes to show that in the world of 007, some things are still for our eyes only.

In its fifty years, 'From Russia with Love's trailer hasn’t lost any of its cinematic lustre. Watching it now only proves that Broccoli and Saltzman knew exactly what they were doing at this early and formative period in the James Bond franchise. They played to 007’s strengths and, in the process, created the concept of event movie going that continues to this day. For that we can all be grateful.