'Becoming Bond' is a love story, but not the one you may expect. You will not see George Lazenby in the same light as his media persona after watching him recount his life story and what could have been. What is clear from this (often touching) film is that turning down 007 was not the biggest regret of his life.

Lazenby narrates almost the entire film himself, with only the occasional question from director Josh Greenbaum. Australian actor Josh Lawson plays the adult Lazenby in the flashback reenactments and there are some nice directorial flourishes when Lawson turns to the camera to break the fourth wall and the audio merges with Lazenby's voice as we bounce to and fro the interview segments. The soundtrack by John Piscitello is also a highlight as the music helps tell the story as it evolves from rough around the edges Australian twang to a polished James Bond feel. The 007 nods are not overdone, but they do sneak in some subtle jokes such as the beluga caviar line at an embassy reception. 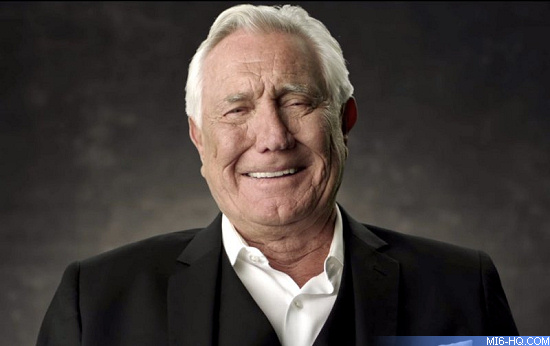 "I felt like every man wanted to be like [James Bond]. I did. Here's a guy who had everything a man wanted. He wins at gambling, always got the girl, and shoots people who got in his way. What more can a man want?"

The film opens with a lot of material that was used in the trailer. After the tease, the film is broken down into (perhaps deliberately) thirteen chapters that loosely spoof Bond phrases.

The camera is looking up at surgeons as Lazenby explains how his first memory is waking up during surgery in a hospital when he was just three years old. After 67 procedures, he was left with half a kidney and his mother was told he would probably only live until he was 12 or 13. "I had better get on with life because, who knows, it could be over at any time." It is clear that this early life experience set the tone for the rest of his years. He would live his life knowing that tomorrow could be his last. The very sentiment that Ian Fleming's character lived by, too. 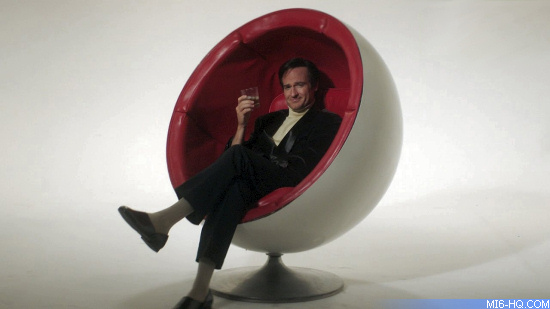 Chapter Notes
1. Lazenby's youth is recanted by tales of stealing his uncle's car, his poor family, how he found school boring, and the multiple canings he received from the deputy headmaster.

2. As he went through puberty, he turned 15 and started noticing girls, losing his virginity to a 23-year-old. "Holy shit! I thought I'd blown my penis apart!", Lazenby chuckles when fondly remembering his first time. Being the only one in his high school to not graduate was an embarrassment, with Lazenby not valuing his education until that moment.

3. Rather than go back and repeat a full year at school, he went to work as a mechanic for his uncle and then tried to become a car salesman as it looked more glamourous. He failed, but his boss sent him to Melbourne to take a course on "how to win friends and influence people." Although it's not made too obvious in the film, this is a turning point for Lazenby as he learns how he could convince someone he was something he was not. "Listen, don't talk. Listen, see what they're interested in, and then only talk about that," he explains. Lazenby found his groove and is swiftly promoted to used car salesman.

4. His socializing with embassy staff, who he helped by selling their executive car fleets, got him used to mixing with the upper classes and formal occasions. It's here he meets Belinda (Fingleton) for the first time and also recalls meeting the Australian Prime Minister when picking her up for a date, although he didn't know that at the time. She was his first love, and her father clearly didn't approve.

5. Belinda's father convinces her to put some distance between them and she heads to London. A few weeks pass and Lazenby jumps on the slow boat to London to be with her again, but she doesn't show up to meet him. He experiences heartbreak for the first time. He quickly wins her back, runs out of money and finds another car dealership job.

6. Now moved in together in London, Lazenby has climbed the ladder to a Mercedez Benz dealership in Park Lane. It's there that he meets the photographer Charles Denton. Lazenby giggles in retrospect that he didn't even know there was such a thing as male models. After walking out of Scotty's Modeling Agency on Bond Street during his lunch hour, he lands a last minute shoot due to another model backing out. The photos came out 3 months later and every agency now wants him. He gives up his car job and is booked up 7 days a week. Things get better and better for him as he lands the Big Fry television commercial. With his ego getting the better of him, he meets a top German model whilst working in Spain and makes a bad decision. It's a future echo of what would happen in his professional life when fame and fortune seemingly cloud his judgment. 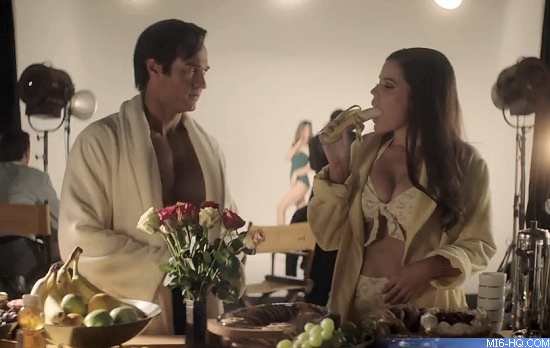 7. We skip forward to three years after Belinda has moved out. Lazenby is enjoying the spoils free love, acid trips, threesomes with women and his fellow Australian model and friend Ken Gaherity. This is the chapter to skip if you are watching on a plane or with kids.

8. Through Ken, he meets agent Maggie Adams (played by Bond girl Jane Seymour) and finds himself brushing shoulders with the Beatles and the Stones at film screenings. Despite never acting before, she suggests he could do the James Bond role and gives him the contact of the casting director Dyson Lovell, but promptly gets kicked out for being non-union. He bluffs his way into a meeting with Harry Saltzman who calls back a pissed off Peter Hunt from Switzerland location hunting.

9. With Peter on his side, Lazenby is screen tested against Harry's wishes now that he's discovered to have no acting experience. Tests go on for four months. This is where the film starts to spoof Lazenby's stories a little with some over the top reenactments of things that probably didn't happen. It is intercut with real test footage and shots from the film.

10. After Harry finally capitulates and gives him the gig, Lazenby is told to uphold secrecy about the casting until the cover of LIFE magazine is published. Hidden away in the south of France, who he decides to call first may surprise you given his public persona, and another curveball of a rushed press conference saw his life pivot in a different direction. Recalling how fate twisted and turned the timing of his life, Lazenby is at his most emotional during this part of his story. It's also at this moment that the film changes gear from the sadness of his lost love to the heady times of being James Bond. 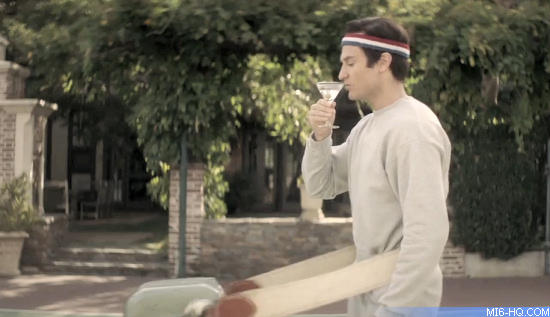 11. Real life footage from the press conference opens this section of the film. "What the fuck have I got myself into?" he asks himself. When filming starts in Switzerland, Lazenby recounts his trepidation at being thrust into the scenario where he was the least experienced person within miles of the set. The friction with Hunt begins whilst filming the gun barrel sequence with the director barking to Lazenby to 'do it like Connery' and Lazenby stubbornly insisting on doing his own thing.

12. By mid-way through the production, Lazenby has gained a bit of a swagger and feels confident in his new job and is having a lot of fun with the women on the film. As his ego ballooned, so did his partying and alcohol intake. The film does not get into any of the on-set drama that has been documented by various people involved over the years, often with conflicting accounts. It's to Lazenby's credit that he does not really dwell on any of the negative experiences or gossip, instead praising the likes of Diana Rigg and Telly Savalas.

13. After the filming has wrapped, although he hadn't seen 'On Her Majesty's Secret Service' himself yet, Lazenby tells the familiar story of the six-film 'slave' contract extension and how he defied the studio and producers by turning up to the premiere with a beard. Intercut with interview footage from the time, Lazenby cements his position that he wanted to be himself when the cameras were off, but the producers wanted a 24/7 007. "It's a tough umbrella to walk under, the James Bond thing." 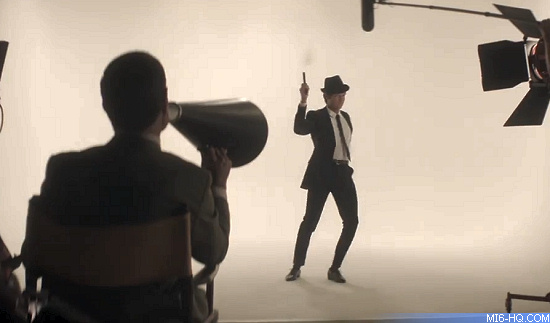 The film ends with Lazenby talking to the audience directly when he explains how he chose to live his life on his own terms. It's his advice to you, the viewer, to be true to yourself and live a fuller life. "I may not be great, but I'm an original."

For the masses who only know Lazenby from his media persona and press interviews over the years, this film will change a lot of minds. He is far from the prickly, bitter and abrasive man he has routinely been painted. Perhaps he has mellowed with age. Perhaps he was just hiding his true self from the public spotlight the whole time. Regardless, one nugget from Lazenby is clear: "You can defy what people expect of you. You can write your own story. "

You do not have all the time in the world.

Thanks to Hulu for the advanced screening. 'Becoming Bond' will stream on Hulu in the USA from May 20th, 2017. International releases are TBA.