Before the teaser trailer drops, what new information emerged today?

How much new information can be gleaned from a one-page press release? Quite a lot it turns out, as the devil is in the detail. Given the absence of official information about 'No Time To Die', even an updated credits list can reveal a lot about how the film has changed since its announcement.

We Hardly Knew Ye
Scott Z. Burns... The hottest script doctor in Hollywood. He was listed in the writing credits for 'No Time To Die', back when it was just 'Bond 25,' at the Jamaica reveal event. Much was made about the producers finally landing Burns to do some polishing on a Bond script after years of chasing him. Now, he's gone. The credits officially now read: Neal Purvis & Robert Wade, and Cary Fukunaga, and Phoebe Waller-Bridge. That's four names but three credits, as per the limits for award qualification. The Writers Guild of America has some labyrinthian rules about who can get a writing credit. In a nutshell, Purvis & Wade count as one credit as they are a 'writing team,' and Scott Z. Burns' work must have contributed less than one-third of the screenplay for him to miss out. As with all unions, these rulings are subject to arbitration and the final credits may ultimately change.

Did You Miss Me?
It's been widely known for some time that Christoph Waltz will be returning as Blofeld in 'No Time To Die', since Cary Fukunaga went on the record that he would want him back. Waltz was even spotted at Pinewood. None of this was mentioned at the reveal event, and his name as been conspicuously absent, until now. Buried in the credits in the MGM press release for today's character poster unveiling was... "with Christoph Waltz." When the teaser trailer is released tomorrow, this will all be old news, but it does seem like an odd mistake to make when they wanted to hold his official reveal back as a surprise. 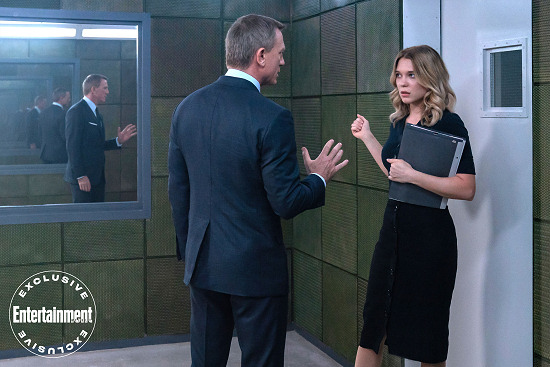 Groundhog Day
In a brief quote given to Entertainment Weekly to go alongside their 'first look' still from the film (which follows Empire Magazine's 'first look' last month), producer Barbara Broccoli gave an unrevealing statement: "This film is really tremendous. We’re really super excited by it. We always start off these movies saying two things. One is, ‘What is Bond’s emotional journey throughout the film?’ And we’ve really thrown the book at it on this one. And the other is, ‘What is he up against in terms of the villain, and the villainy, and what’s happening in the world?’ And I think on both counts we’ve really pushed the boat out."

Forgive us for pointing out that those same pitches were made, almost verbatim, ahead of the release of 'Die Another Day'.

Honour Roll
The order of the cast list in credits usually corresponds to the amount of screen time in the film but can be tilted by the star power of an actor or their agent. Back in 1985, Christopher Walken negotiated a box to go around his name on the 'A View To A Kill' poster. Conversely, going last with the "with / as " credit is usually brokered by important or popular actors that don't have large parts.  Both Wright and Waltz get the "with" treatment (which makes it odd to read), whilst Fiennes gets the extra "as M" credit.  Ben Whishaw looks like he will have more to do in 'No Time To Die', as he is listed ahead of Naomie Harris (Moneypenny). Remaining MI6 regular Rory Kinnear (Tanner) is relegated to "also starring." Joining him in the last line are Ana de Armas, Dali Benssalah, David Dencik, and Billy Magnussen, who will all have limited roles.