What details have been revealed by the new No Time To Die trailer?

This article contains nothing that is not in the public domain through the release of the latest trailer. If you are not watching the trailer to avoid all possible spoilers and preserve surprise when watching the film for the first time, do not continue.

Rising Star
Back in March, when 'No Time To Die' was just weeks away from release, Ana de Armas was the hottest new actor on the planet. Six months later, she is still higher on the IMDB STARmeter than Daniel Craig, and has multiple projects about to release this winter ensuring she will remain in the zeitgeist. It is, therefore, no surprise that the trailer spends a chunk of its time on her character Paloma, even though her onscreen time in the film is limited. 'No Time To Die' looks like it will follow the rich vein of female characters like Solange in 'Casino Royale' and Severine in 'Skyfall' that make big impacts with small appearances. 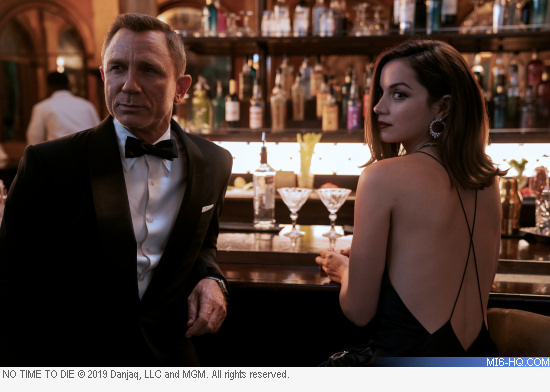 Nomi’s MI6 Status [POTENTIAL SPOILER - HIGHLIGHT TO READ]
It has long been rumoured that Lashana Lynch’s character Nomi will be taking over James Bond’s code number since he has retired from MI6. Cast and crew have successfully avoided answering this question so far, and the English-language trailer has Bond saying: “I’ve met your new double-oh.” However, the ruse is up in both the Spanish and Italian dubbed trailers as Bond says: “I’ve met your new zero zero seven.”  A major blunder for the publicity team. This is bound to cause some renewed consternation with certain factions of the fan community that threatened to boycott the film if Bond’s code number was given to a new character, let alone a woman.

This Is The Big One, 007
No details of Safin’s plot have been officially released, but the scale of his enterprise is alluded to when Nomi says: “He’ll kill millions" and Bond replies, "If we don't do this, there'll be nothing left to save." We are returning back to the heady days of 'Thunderball' and 'Moonraker' in terms of scale. This addresses the balance of audience expectations as previous trailers framed it as a revenge plot, although that is still an element this time, too.

Call-Backs
Bond has long retired, but M, Moneypenny, and Q are all in the same positions years after the events of 'SPECTRE'. Nomi makes a direct reference to 'Skyfall' when she says to Moneypenny: “I get why you shot him," to which she replies, "Yeah, well, everyone tries. At least once." There is also a nod to 'Casino Royale' when Paloma holds up a tuxedo for Bond to put on. 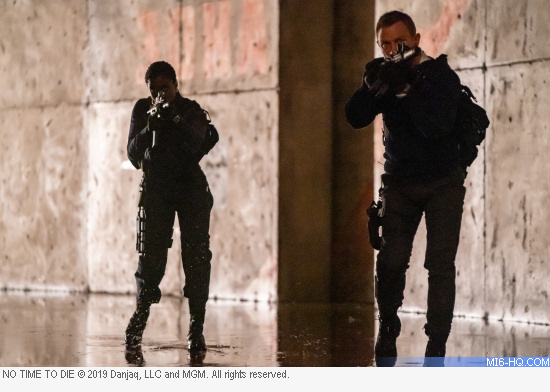 Digital Tinkering
The Craig-era trailers have often focussed on a specific stunt, and 'No Time To Die' continues the tradition by using the Matera bridge rope jump every time. Look closely compared to the first trailer, and you will notice the background of Matera has been digitally replaced in the shots where Bond is leaping over the wall. Gone are the buildings and here are fake mountains. Although unnecessary, this was probably done to alter the geography of the location as the bridge is not as close to the town center in real-life as it appears in the car chase. 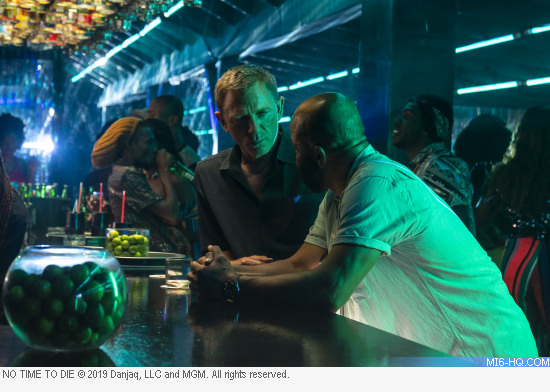 Q’s Back In The Field
MI6 is always open to sending one of their most valuable assets into the field in the path of danger, and 'No Time To Die' will continue the tradition first set by 'Thunderball' and 'You Only Live Twice'. Q appears in the aircraft transporter where Bond and Nomi drop in the swing-wing jet over Safin’s base.

Billy Magnussen Finally Appears
He has been absent from almost all publicity, except for his character poster, but Billy Magnussen’s CIA character ‘Ash’ can be seen briefly in two scenes of the new trailer. He is wearing a white shirt over Bond’s shoulder in the Jamaican bar and is also the shadowy driver of the Land Rover. 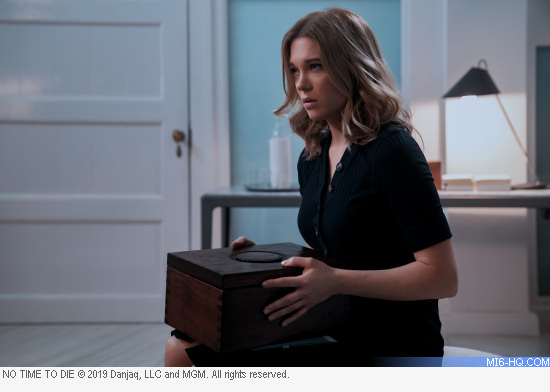 It’s Self Aware
All through the summer, when most of the world was under lockdown or social distancing rules due to the COVID-19 pandemic, most of the media coverage of the film industry was dominated by the stubbornness and eventual capitulation of Warner Bros to change strategy for ‘Tenet,’ or Disney’s bold choice to shift ‘Mulan’ to their streaming service. 'No Time To Die' was lost in the mix, often being relegated to a brief mention along with ‘Wonder Woman 84’, ‘Black Widow’ in the footer of articles. The Guardian even got the name of the film wrong (Never Say Die) and never bothered to correct it. MGM and Universal were silent over the summer months with no official publicity for the film. In the new trailer, M asks: “Come on Bond, where the hell are you?” which is an unsubtle nod to the wider cinema-going audience who may have been asking the same thing.

'No Time To Die' is currently scheduled to be released in the UK on November 12th and in the USA on November 20th.