Back in 1977, just before 'The Spy Who Loved Me' was about to launch on cinema screens around the world, Roger Moore was interviewed by the weekly UK television listings magazine TV Times about his favourite food.

From Mother With Love... 007's Pie Thriller
Ever since he fell off a rusty coal shed roof as a tubby youngster, the star of recent 007 films Roger Moore has been conscious of his weight. A boy bursting out of his wooly suit couldn't be expected to have a Bond-like agility to stay on slippery slopes. His legs were badly scarred in the incident.

Moore admits to suffering traumas about being overweight as a child. If anybody was at fault it was his mother, who was noted for her homely cooking at their house in Stockwell, South London. Roger's mother and his father, a policeman, were delighted when he took up roller skating. That would slim him down. "We used to skate for miles. It might have been great exercise, but it also made me hungrier."

Moore's memories of food include backing potatoes on the night watchman's fire. "We would run home for a large potato to put on the charcoal brazier and, sometimes, the night-watchman would let us have a tiny piece of margarine and a little salt to add flavour."

But his favourite was his Mum's steak and kidney pie.

"She made it with a leg of beef and shortcrust pastry. It wasn't the puffy kind. But we'd eat it cold, when the jelly from the meat was set. I couldn't begin to tell you how to cook it."

So I asked his Mum, who still lives with her husband in South London. And Mrs. Lily Moore still cooks the same steak and kidney pie, but nowadays she usually pops two into the oven, and takes one when she goes to visit her son. 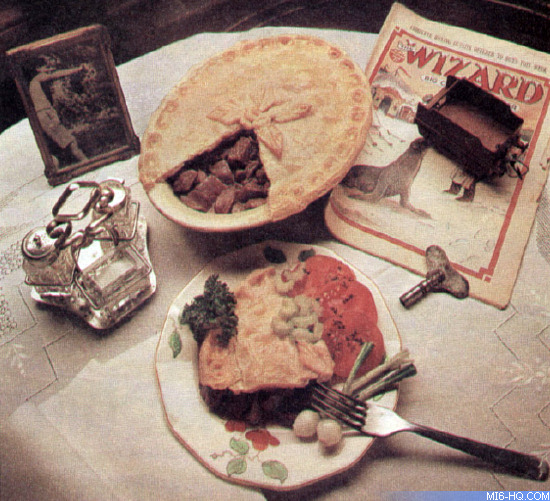 Method
Wipe the beef and cut into chunks, removing excess fat. Wipe the kidneys, remove skin and cut into small pieces, removing the core. Toss the beef and kidneys in the 2 level tablespoons of flour seasoned with salt and pepper. Skin and chop onion. Put the beef, kidneys, and onions into a pan. Crumble in the stock cube and just cover with water. Bring to the boil, then simmer for 1.5-2 hours. Meanwhile, sift the remaining flour and a pinch of salt into a bowl. Rub in the margarine and lard until the mixture looks like breadcrumbs. Add enough cold water to form a stiff dough. Wrap in greaseproof paper and leave in the refrigerator until required. When the meat is cooked, allow to cool then place in a pie dish with enough of the gravy to half-fill it. Roll out the pastry on a slightly floured board, 1 inch (2.5cm) larger than the top of the dish. Cut off a half-inch (1.5cm) strip from around the edge of the pastry and put this strip around the edge of the dish. Moisten the edges of the pastry with water and put on the top of the pie. Trim and seal, make a hole in the centre and decorate around the hole with leaves of pastry made from the trimmings. Brush with milk or beaten egg. Bake for 25-30 minutes until golden brown, at 400F (200C) of Mark 6.