The film's title was leaked ahead of the traditional start-of-production press conference after Sony registered various domain names, including skyfallthefilm.com and jamesbond-skyfall.com.

Coca-Cola was sprayed on the tarmac to increase the grip of the stunt vehicles in the pre-titles sequence.

The pre-titles sequence was initially intended to be set in India. Ahmedabad in the north-west of the country was selected. Shooting was planned for October 2011 but pushed back when permissions to close rail lines for eight hours a day for up to a week were not granted. The production rescheduled the pre-titles sequence for the end of the shoot and relocated to Istanbul.

85 suits were made available to the production for Bond and his doubles filming the pre-titles sequence.

In Turkey, Patrice wields a Glock 18, which is loaded with a 100-round drum magazine. It is later revealed that his ammunition of choice is a depleted uranium shell, more commonly associated with tanks and aircraft. 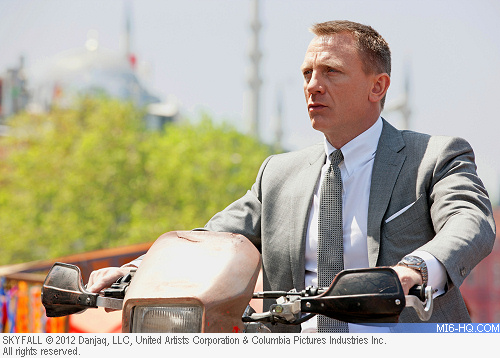 Craig is known to have improvised a number of lines in the film, including "health and safety, carry on". In the pre-titles sequence he spontaneously added the cuff check after jumping from the digger into the passenger carriage. In an interview with MI6 Confidential magazine, Craig humorously described this as a "nut check".

This is the second time that Bond drinks beer on screen but the first time that the logo is patently Heineken, one of the promotional partners of the franchise.

M's bulldog that she bequeath to Bond is a feature of this and the following 'SPECTRE'. It was selected by a prop buyer from a second-hand store but rocketed to fame as a result of the film. The dog was manufactured by Royal Doulton and, after 'Skyfall' was released, snapped up by filmgoers. Royal Doulton couldn't meet demand and 'Bulldog Jack' spent several long months out of stock.

Bond's obituary reads: "A senior officer of the Ministry of Defence, Commander James Bond C.M.G. R.N is missing believed killed, while on an official mission to Turkey". After 'You Only Live Twice' this is the second time that Bond's obituary has been seen on screen.

M is to be awarded GCMG (Dame Grand Cross) with full honours on retirement.

The exterior to M's flat, seen as she arrives home one dark, rainy night, is filmed at 82 Cadogan Square. Cadogan Square, near Sloane Square, was the home of the late James Bond composer, John Barry.

This is the third time we see inside M's home, and the second time in the Craig era. First Bond visit's M's home in 'On Her Majesty's Secret Service' and then, 36 years later, Bond breaks into M's London flat in 'Casino Royale'.

This story has a close affinity with unused tube stations. Tanner, taking Bond to the temporary MI6 headquarters describes their location as Churchill's bunker. This based on the idea that Winston Churchill once sheltered in an underground station during the Blitz. The location of Churchill's real bunker is Down Street in Mayfair, which operated as a tube station until 1932. It was then repurposed for the PM. Bond also spots Silva's code, Granborough, named after Granborough Road, a real life abandoned station on the Metropolitan line. 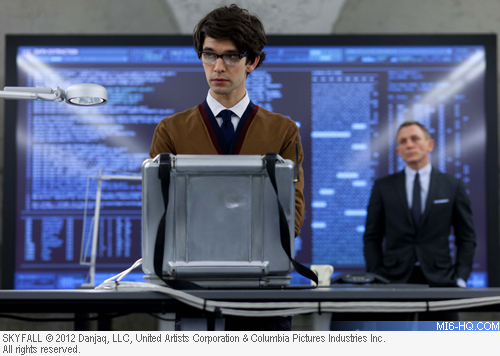 Ben Whishaw is the third man to play the MI6 Quartermaster, the second to affectionately labelled "Q" by Bond, and the first to be younger than the 007 star.

The painting admired by Q in the National Gallery is The Fighting Temeraire (1838) by Turner.

Q's sardonic reference to an "exploding pen" has only been a reality once in the official film franchise. Bond is issued with a bomb in a pen by Q in 'GoldenEye'. Meanwhile, 'Moonraker' includes a poison pen and 'Octopussy' a pen that releases acid to melt away metals.

The passport that Bond travels under in 'Skyfall' is a "genuine" passport issued to the production by the British Home Office. According to the details, Bond's alias is John Adam Bryce born 16 December 1968. Bryce was Bond's alias in Ian Fleming's "Live and Let Die".

Craig never travelled to Shanghai to film, indeed only the second unit travelled to the location. They shot on the impressive neon-blue highways and the Chinese government loaned the production a helicopter for their areal work. The swimming scene was filmed at the Four Seasons hotel in London, the entrance to the high-rise where Patrice assassinates his target is on Primrose Street, London, Ascot Racecourse was turned into Shanghai airport, and the rest of the shoot completed on sets at Pinewood. Craig's entrance to the casino was filmed on the Paddock Tank at Pinewood.

On the interior to the skyscraper, Roger Deakins lit the glass set exclusively with two large LED signs. The set became nicknamed the jellyfish after one of the recurring motifs on the LED screens.

A scene involving Sévérine and Patrice exchanging a briefcase containing his sniper rifle on the escalators at the airport was cut from the film. Clips of the scene were used in trailers and making-of featurette.

The first official still that appeared online from the shoot was of Bond lounging by the poolside. It was actually a still intended for long lead print publications and released online by mistake. This was quickly followed up with an eminently more Bondian shot. This showed 007, his Walther - and to many's surprise - a beard in Shanghai stalking Patrice. 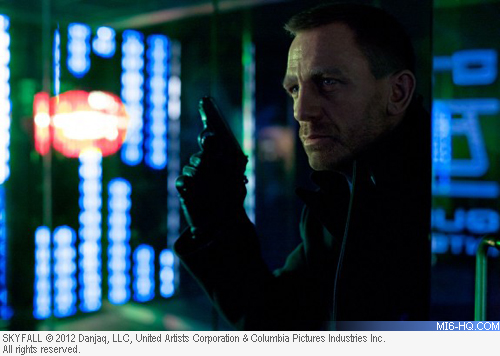 It takes almost 50 minutes of screen time before Bond kills his first target (Patrice). Even then, he shows frustration at letting him die without giving up information.

When the first round of names are leaked on YouTube, the names of MI6 agents include 'Skyfall' crew members: executive assistant Andrew Surry, art director Paul Inglis, and effects technician Steve Benelisha.

Mallory's backstory is that he was a Lieutenant Colonel in the Northern Ireland Hereford Regiment and was captured for three months by the IRA. This explains him competently wielding a weapon in the enquiry scenes.

Sévérine's boat is christened the Chimera. A Chimera is a fire-breathing lion with a goat's head from Greek mythology and referenced by Homer in the 'Iliad'.

The scene on board the Chimera was filmed in Fethiye, Turkey, at the same time as they filmed Bond's beachside "recuperation". According to Gregg Wilson, this scene fell by the wayside and a makeshift set was built on the docks to capture Bond's romantic rendezvous with Sévérine.

Silva's base is inspired by Hashima Island, the abandoned island off the coast of Nagasaki. The real island was used for reference footage and a few (CGI-enhanced) establishing shots. 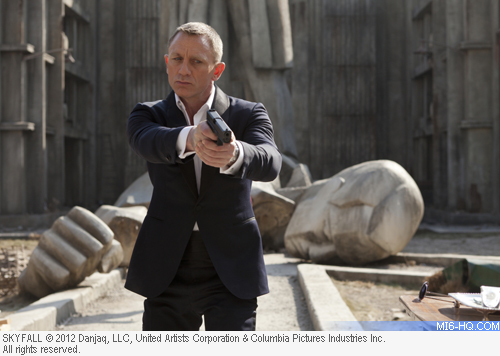 As Bond and Silva walk through the dead city, the French WWII era song, 'Boum!', is heard playing on the tannoy.

Bond and Silva drink a "50-year-old" Macallan whisky which is said to be a favourite of Bond's. As the film franchise also celebrated a half a century in 2012, Bond star Daniel Craig and his co-stars signed a bottle of 1962 Macallan for a charity auction.

Raoul Silva is an alias for Tiago Rodriguez.

M's assistant is played by Elize Du Toit, but her role was almost entirely cut from the film. She can be seen in the enquiry scenes, and briefly in the pre-titles sequence where she was – before the edit – to have had a larger role.

In defending herself before the board of enquiry, M quotes from 'Ulysses' by Lord Tennyson. Tennyson was prompted to write the poem following the death of his closest friend. He completed it on 20 October 1833, but it was not published until 1842. The final three lines are inscribed on a cross at Observation Hill, Antarctica, to commemorate explorer Robert Falcon Scott and his party, who died on their return trek from the South Pole in 1912. M quotes the last five lines.

The title of Bond's ancestral home was a late-night spur of the imagination from writers Purvis and Wade, not from Fleming lore. In Fleming's novels Bond's father is Scottish and he, like his father, attended Fettes College in Scotland. The film is the first time the cinematic Bond's heritage and parentage are explicitly discussed.

This is the first time the f-word is used by a character in a Bond film. Several instances of 'shit' had been used in Bond films past – including four times in 'Licence To Kill' – but 'Skyfall' trumps this with five.

The arrival of Silva by helicopter is an homage to Francis Ford Coppola's 'Apocalypse Now'. Perhaps aptly, then, the AgustaWestland AW101 helicopter engine noise was anachronistically dubbed over by a Vietnam-era helicopter. 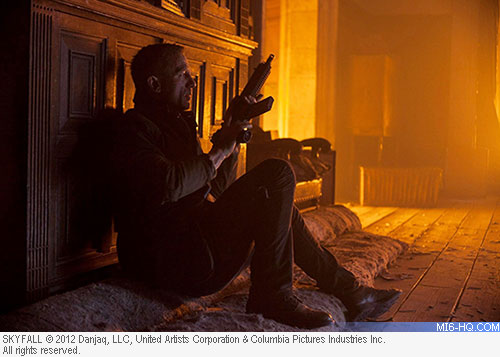 The painting of the real-life SIS building hung above M's (Ralph Fiennes) desk is by James Hart Dyke, who also designed the poster for 'Everything Or Nothing', the 2012 documentary.

Of her seven Bond films as M, 'Skyfall' boasts Judi Dench's largest amount of screen time. Indeed, she enjoys more screen time in this film alone than Desmond Llewelyn had in his 17 films as Q.

This is the first Bond film to be shot digitally, and the first time cinematographer Roger Deakins worked with digital.

On the inscription to the box that Bond receives from M, the props department have written her name as Olivia Mansfield. Bond lore to this point had held her name to be Barbara Mawdsley, although it had never been said on screen.

In order to keep the secret of M's death, many performers with minor roles were never issued a script.

'Skyfall' received five Oscar nods, the most number of Academy Award nominations in the franchise's history. The film doubled the number of Oscars the franchise had won: from two to four.

Trumpeter Derek Watkins played his final Bond theme for 'Skyfall'. He passed away in 2013 having played for all 23 films since age seventeen and 'Dr. No'.

It was the first film to receive an IMAX release.