In November 2013 Danjaq announced that it had acquired all the remaining James Bond rights it had not previously held from the McClory estate. This opened the door for the use of the name/organisation SPECTRE and its head, Blofeld.

"SPECTRE" is left ambiguous in its meaning. The organisation's name is mentioned only twice in the film, once when Madeleine reveals the name of the organisation to Q and Bond in Austria and once when 007 reports to M in the London safe house. Bond fans know that SPECTRE is an acronym for Special Executive for Counter-Intelligence, Terrorism, Revenge and Extortion. Many in the press assumed that the title was not an acronym and wrote it in title-case: 'Spectre.' However, the title treatment on the EON/Sony marketing consistently wrote it with capitals.

The plot was devised by John Logan in consultation with Sam Mendes. Regular Bond scribes, Purvis and Wade, were expected to have departed the franchise with 'Skyfall' but when the producers were unsatisfied with Logan's drafts, Purvis and Wade were recruited again. Around the same time, the filmmakers also considered but then rejected the possibility of a two-film story arc, presumably involving Blofeld. The film is also the first time that Jez Butterworth gets a 007 screenwriting credit, having previously helped Mendes polish dialogue on 'Skyfall'.

The opening shot comprised of four separate shots strung together by ILM in post production. The first swooping intro picks up Bond in the streets of Mexico City and follows him to the door of the hotel. The second shot – filmed on location in Mexico – follows Bond up the stairs and into the elevator. The third shot takes over when Bond and Estrella arrive at their hotel room, the interior of which was shot at Pinewood. The fourth shot sees Bond exiting the window and walking along the rooftop. A 'skeleton' set was built on location so Craig could move smoothly from interior to exterior. Mendes credited Orson Welles' "Touch of Evil" (1958) for the inspiration for the shot. 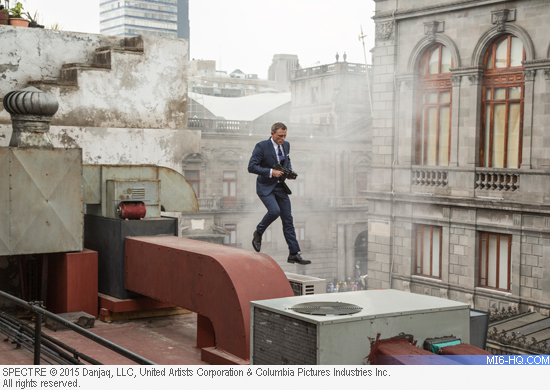 "SPECTRE" marks Rory Kinnear's third appearance as Tanner, making him the most frequent actor to play Bond's friend and M's chief of staff.

Several of the key locations, including Morocco, Austria, and London are held in common with Timothy Dalton's 'The Living Daylights'.

Moneypenny's visit to Bond's flat was re-filmed at the end of the shoot, removing the presence of another woman in Bond's bed.

The DB10 was manufactured by Aston Martin exclusively for EON Productions. The design was all new but it used the chassis and engine from their V8 Vantage. The run was limited to ten cars, some of which were adapted by the stunts team to include a rig atop the car, allowing it to seem as if Craig was performing the high octane action. One of the two 'hero' cars was sold at auction in 2016 for £2.4 million.

Switches on the DB10 console are: Backfire (which reveals a hidden gun from behind the rear AM badge and allows Bond to sight up adversaries in the rear view mirror); Atmosphere (triggers the radio, comically playing "New York, New York"); Exhaust (fires a flamethrower); Air (launches the ejector seat).

The ejector seat surprise was spoiled by leaked planning permissions that documented the filmmakers intent to use a parachute on one night of their Rome shoot.

This is one of the rare Bond films to reference/feature another 00-agent. Although never seen on screen, it is 009 who is due to pick up the DB10 when Bond steals it from Q-Branch, leaving a bottle of champagne in its place. 009 was also the 00-number assigned to Bond's colleague in 'Octopussy' who was assassinated by circus performers Mischka & Grischska. 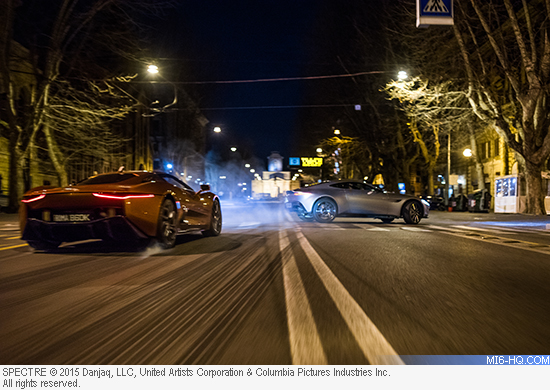 Monica Bellucci was cast as Lucia Sciarra age 51, making her the oldest 'Bond woman' to date. She previously auditioned for the role of Paris Carver in 'Tomorrow Never Dies'.

At the last minute, the production had to find a new location to double for the mausoleum at which Sciarra's funeral takes place. Permission was denied for the use of the Verano cemetery in Rome after the religious order, Archconfraternity of the Departed, vetoed the shoot. Instead, the Museo Della Civilta Romana (Museum of Roman Civilisation) was dressed to suit the filmmakers' needs.

The only film in which Felix Leiter is referenced but not seen on screen.

Bond's first encounter with Oberhauser has the villain cry "cuckoo". This is a reference to Bond being a "cuckoo in the nest", the foreigner disrupting the happiness of Oberhauser's family life.

Franz Oberhauser is supposed to be the son of the Fleming-created character, Hannes Oberhauser. The latter is reported (in Fleming's "Octopussy") to have taught Bond to ski as a teenager and served as a father figure. However, the Blofeld of the books was of no relation to Bond. 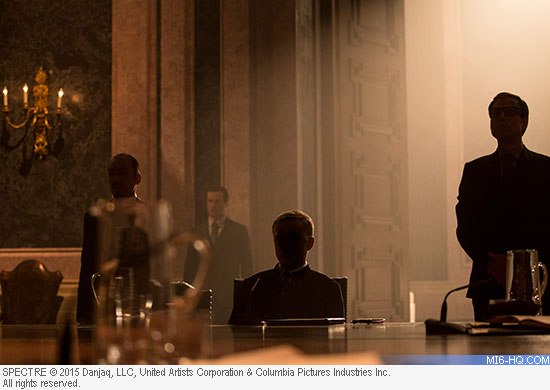 The second unit travelled to Rome without certain permissions to film the stunning approach to the Vatican. Permissions were finally granted whilst the filmmakers were on location.

Several prior Bond films have featured early-release cars, but all of these would eventually be put into production. The use of the Jaguar C-X75 marks the first time in the franchise that a concept car was used on screen. The C-X75 was first unveiled at the 2010 Paris Auto Show.

News of Bond's Roman antics reaches Tanner when he and M are listening to C's Nine Eyes pitch in Japan. He is sent a web page that looks spookily like BBC news, albeit with the BBC logo redacted.

Nine Eyes is loosely based on the real world multilateral intelligence sharing agreement between Australia, Canada, New Zealand, the United Kingdom and the United States known as Five Eyes.

Q reports Bond's location as Chelsea, London, when he is really in Altaussee, Austria. In the Fleming novels, Bond's flat is located in Chelsea, but its location is never formally declared in the film universe. The exterior to Bond's flat was filmed in Stanley Gardens, Notting Hill for "SPECTRE". This is only the third time, after 'Dr. No' and 'Live And Let Die' that Bond's flat is seen on screen. Sam Mendes is known to be a fan of 'Live and Let Die'.

Jesper Christiansen has now played Mr. White in three Bond films, giving him the most appearances as the same villain in the franchise's history. 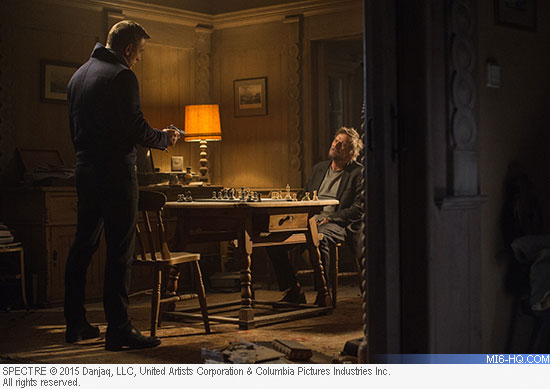 Thallium, which was put in Mr. White's cellphone, is atomic number 81. It is soluble and toxic on contact with skin. It is an effective poison as it is colourless, odourless and tasteless.

Q tells Bond he is staying at The Pevsner Hotel, a reference to Tom Pevsner, the producer on six Bond adventures throughout the '80s and '90s.

After Bond and Madeleine find the coordinates to SPECTRE's headquarters, M and Moneypenny arrive too late to attend the Nine Eyes meeting. Here C is chatting to two familiar gentlemen, played by Michael G. Wilson and his son, Gregg Wilson.

The CNS building does not exist, but the production shot at the Home of the Mayor and London Assembly after having been declined permission to shoot in the Welsh parliament.

In a nod to 'From Russia With Love' the train line that Bond and Madeleine travel on in Morocco is known as the Oriental Desert Express.

On the train trip through Morocco Bond departs from his usual Vodka 'Vesper' Martini, choosing instead to join Madeleine in a dirty martini. This is the first time Bond drinks this variant on screen. The major difference is the inclusion of an olive and olive brine, rather than Bond's preferred twist of lemon. 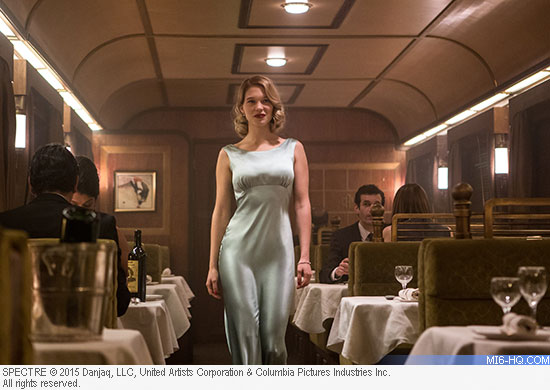 The real-life location of the villain's Moroccan lair is Gara Medouar. The crater was created by erosion, not a meteorite. The fictional meteorite Blofeld proudly shows to Bond and Madeleine is named "Kartenhoff".

The plaque on the door of the safe house in which Bond, Moneypenny, Tanner, and M meet in London reads "Hildebrand Prints & Rarities" in homage to the Fleming short story "The Hildebrand Rarity".

Among the names on the wall of the fallen at the Vauxhall building is set decorator Fergus Clegg and draughtsman Archie Campbell-Baldwin.

Approximately £24 million worth of cars were destroyed in the making of the film.

The British band Radiohead recorded and subsequently released on Soundcloud a potential title-track for "SPECTRE". 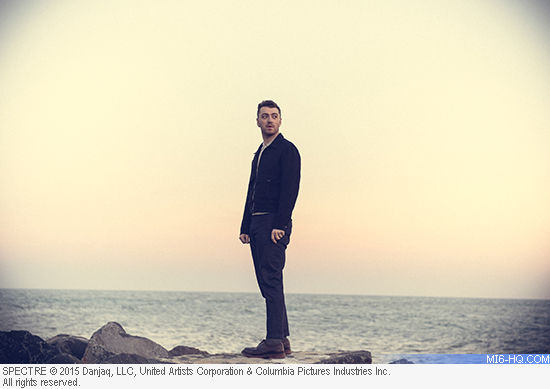 'SPECTRE' is the second consecutive Bond picture to win an Oscar. Sam Smith won the best original song award for 'Writing's on the Wall'.

It is understood that the film cost upwards of $250 million to produce, making it the most expensive Bond film in history.

"SPECTRE" is the longest Bond film to date with a running time of 2 hours and 28 minutes.