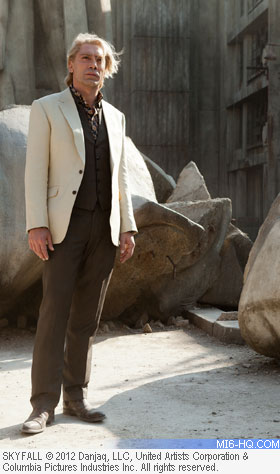 "She's sent you after me knowing you were not ready, that you'll probably die. Mummy was very bad."

Profile
Determined to the point of obsession, Raoul Silva is a vengeful man. He easily manipulates the people who work for him and takes pride in his ability to exploit the digital age in order to dig up dirt on the British intelligence forces. He concocts a plan that undermines the entire British Security Service in order to catch the attention of MI6's chief. Indeed, Silva will stop at nothing to see the death of M, and cares not if he loses his own life in the process.

Scheme
After acquiring digital lists of MI6's undercover operatives, Silva proceeds to leak the data, with deadly consequences. His intent is to get into the mind of MI6's chief, M, with whom he holds a grudge. The section chief, it transpires, sold out Silva in exchange for prisoners held by the Chinese government whilst she was overseeing the transition in Hong Kong from British colony to special administrative region. He further taunts the MI6 chief with an attack on her London headquarters - all conducted as a kind of cyberterrorism. When Bond takes charge of the situation and races M to safety, Silva has to improvise a raid on 007's family home, Skyfall.

I've Been Expecting You
So feared that his associates do not speak his name, Bond is lead to an abandoned island off the coast of Macau, where Silva reveals his hand. He enters his server room, where Bond is trussed up and closely guarded, and struts confidently toward the helpless agent, mocking the British Empire and Bond himself.

Headquarters
Having managed to convince the island's inhabitance of a perilous threat to their safety and force mass evacuation, Silva now resides on this unknown, ruined and abandoned island, relishing the disarray. 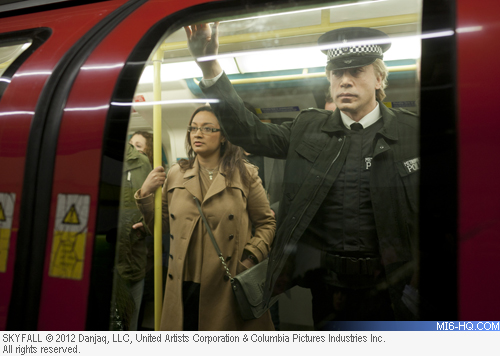 Above: Silva escapes his attack on M's hearing by disguising himself as a London policeman.

Gadgets & Vehicles
With obvious connections to the police, Silva has access to police weapons, vehicles and even a uniform, allowing him to blend into the havoc he causes with intent to taunt and assassinate M. In the final assault on Skyfall Lodge, the villain arrives onboard a military-spec helicopter, armed with automatic weapons.

Dress Code
His preferred suit is a flamboyant cream-coloured garb which he teams with a floral shirt. He swaps this for a three quarter leather coat when he pursues Bond and M to Scotland. 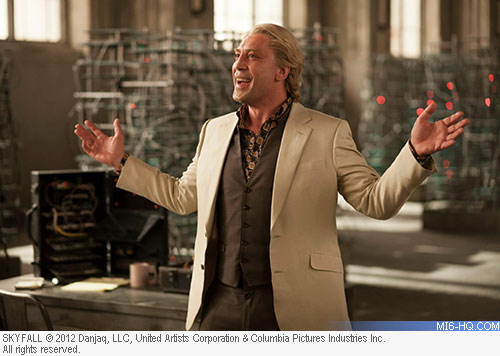 Biography
Javier Ángel Encinas Bardem ("Hav-ear Bar-dem") was born on 1st March, 1969, in Las Palmas, in the Spanish Canary Islands. The Bardem family is a familiar one in the Spanish film industry: Javier's uncle is the famed producer/director Juan Antonio Bardem and both his elder siblings are actors. Unsurprisingly Bardem was on his first TV set at a very young age. He appeared in "El Pícaro" in 1974, aged just six years old. "El Pícaro" (the scoundrel), a black comedy, ran for a single season but is now regarded as a Spanish classic.

By the mid-1990s Bardem was winning regular supporting roles in Spanish romantic comedies - notably the 1992 film, "Jamón, Jamón", on which Javier met his would-be wife: Penélope Cruz. Bardem is probably most well known to English and American filmgoers as the creepy villain Anton Chigurh in Coen brothers' "No Country for Old Men" (2007). Bardem co-starred with Tommy Lee Jones, Woody Harrelson, Josh Brolin and Kelly Macdonald in the well-received crime/thriller. For his efforts, Bardem earned another Oscar, this time Best Supporting Actor and the film cleaned up at the 2008 Academy Awards, with trophies for Directing, Best Picture, Cinematography, Editing, two Sound awards and Best Adapted Screenplay.