The Arecibo Observatory in Puerto Rico has collapsed today and is effectively destroyed. The troubled dish had been scheduled for demolition after catastrophic failures in the cabling that suspended the platform. James Bond fans will instantly recognise it as Alec Trevelyan's Cuban base in the 1995 film 'GoldenEye'.

“We are saddened by this situation but thankful that no one was hurt,” Sethuraman Panchanathan, the director of NSF, said in a statement. He added: “Our focus is now on assessing the damage, finding ways to restore operations at other parts of the observatory, and working to continue supporting the scientific community, and the people of Puerto Rico." 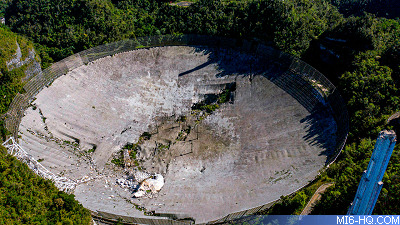 The instrument platform of the 305-meter telescope at Arecibo Observatory in Puerto Rico fell at approximately 7:55 a.m. Atlantic Standard Time Dec. 1, resulting in damage to the dish and surrounding facilities. No injuries were reported as a result of the collapse.

The investigation into the platform’s fall is ongoing. Initial findings indicate that the top section of all three of the 305-meter telescope’s support towers broke off. As the 900-ton instrument platform fell, the telescope’s support cables also dropped.