The final premiere of "Skyfall" took place last night at the State Theatre in Sydney, Australia.

"The great thing is that Sydney always marks the end of the tour, so I'm always happy to come here," Craig told reporters said with a laugh.

The weather was unseasonably uncooperative as Daniel Craig, Berenice Marlohe and Naomie Harris had to be escorted along the red carpet with umbrellas.

But the downpour did not dissuade fans from attending the rope lines along Market Street as crowds endured to rain with an impromptu canopy of umbrellas and ponchos before the film's stars arrived just before 6pm.

A break in the rain held long enough for Craig to mingle on the red carpet and return to his tradition of taking pictures with fans camera's. 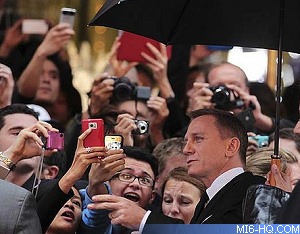 Speaking about the lineage of Craig's three films so far, producer Barbara Broccoli said, "It does feel like a trilogy, though it wasn't intended to be. It feels like he started in Casino Royale, becoming Bond, and I think Quantum [of Solace] was about him getting Vesper [Lynd] out of his system, paying the price. [Skyfall] is very much about the rebuilding." 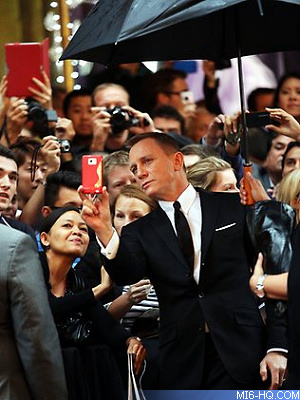