MI6 representatives were amongst the crowds when Boyd teased the novel, and to hear the title announcement first hand.

Bond is set to globe-trot in Boyd's Bond offering, with Europe, Africa and the United States on the itinerary.

The new book will be published at the same time internationally, with HarperCollins publishing in Canada and the U.S. 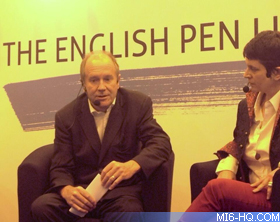 Above: Boyd chats to the gathered journalists at the London Book Fair

Thanks to Ben Williams for the alert.