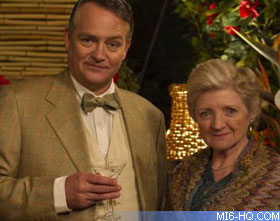 "If you write crime you have to read Christie and it is amazing how intricately constructed those books are, they are a masterclass. Both she and Fleming had their heyday in the middle of the last century, but their characters remain in the public consciousness because their books worked and are still readable," the actor and writer tells WhatsOnTV.co.uk.

Reflecting on his newfound career as a children's author, Higson explains: "It's great if a teacher or parent says that their child has never finished a book, but that he has read one of mine and now loves reading... But it's even better if they say the child now only reads mine!"