British actress Dame Judi Dench, who appeared as MI6 chief 'M' in seven James Bond films, has accepted an honorary degree from the University of Stirling. 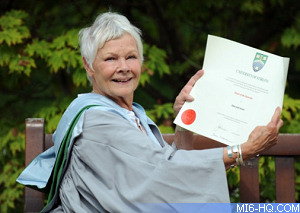 Dench receives the award of Doctor of the University for her contribution to the arts and is also recognised for her work in highlighting dementia. She has been a long-standing supporter of the work performed at the universityâs Dementia Services Development Centre since she opened the building a decade ago.

Professor June Andrews, the centreâs director, said the actress had given a âterrific boostâ to its international work. âHer moving Bafta-winning performance depicting a woman with dementia in the classic film Iris is still one of our best resources in helping everyone understand the value of every person with this condition, and the evidence base for supporting them,â she said.