Behind the scenes of the recording of new 'O.H.M.S.S.' radio play

Bond actor Toby Stephens is once again voicing 007 in a new radio adaption of Ian Flemings novels. Having previously starred in Dr. No, Goldfinger and From Russia With Love, Stephens is back for On Her Majesty's Secret Service.

As first revealed by MI6 back in November last year, Stephens is joined, this time, by a range of ladies - as needs must - and the cast includes another long-time Bond girl, Joanna Lumley, who will be voicing Irma Bunt. Lumley previously played the unnamed English Girl in the 1969 screen adaption of the same story.

Radio Times went back stage with the cast when they were recording the play. 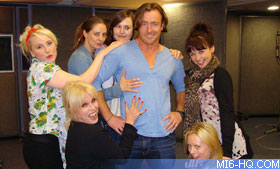 The cast also includes Alfred Molina and Joanna Cassidy and will be broadcast on Radio 4 at 2:30pm on Saturday 3 May.