The surprising trinket given to 007 by Judi Dench's "M" was a Royal Doulton classic that has been reproduced in light of its starring role in "Skyfall". The model comes in its original box, but has a exclusive sleeve that says "Special Desk appearance in Sky Fall 007." Royal Doulton has been making bulldogs since the 1800s. They reissued them for the James Bond filmmakers. 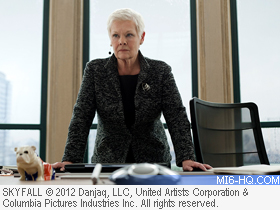 Above: Judi Dench as M with Bulldog Jack

Sporadically in and out of stock on the maker's own website, Amazon UK and Amazon US currently have a small number of the bulldog seen in "Skyfall" available in stock.