MI6 brought you the first sneak peak at Pierce Brosnan's return to the spy thriller genre back in May, but today the official theatrical release poster for 'November Man' was released online.

One note of interest is that Bond girl Olga Kurylenko, despite appearing on the poster, is not in the top billing. 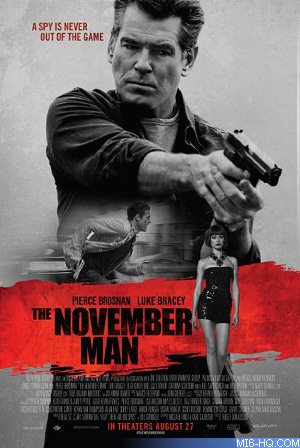 The Irish Dreamtime production that stars the former 007 actor and Bond girl Olga Kurylenko is directed by "The Bank Job" helmsman Roger Donaldson. In the picture, Pierce Brosnan plays a retired CIA agent who is brought back into the fray to deal with a situation cause by one of his protÃ©gÃ©s. It is based on the novel "There Are No Spies " by Bill Granger.

The film is scheduled for release in the USA on August 27th 2014 and is expected to open across Europe in November 2014.