BondStars.com have arranged a signing session with Sir Roger Moore -- the seven time James Bond star. Recently he announced another memoir, "One Lucky Bastard" or "Last Man Standing" (depending on where the book will be published), subtitled "Tales from Tinseltown". 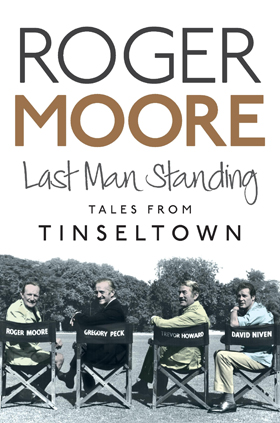 In a career that spans over seven decades, Roger Moore has been at the very heart of the show business scene. Of course, he's an actor and has starred in films that have made him famous the world over; but he's also a tremendous prankster, joker and raconteur - in fact, he's well known as one of the nicest guys in the business, and someone who has always been up for some fun. In this fabulous collection of true stories from his stellar career, Roger lifts the lid on the movie business, from Hollywood to Pinewood. It features outrageous tales from his own life and career as well as those told to him by a host of stars and filmmakers, including Tony Curtis, Sean Connery, Michael Caine, David Niven, Frank Sinatra, Gregory Peck, John Mills, Peter Sellers, Michael Winner, Cubby Broccoli and many more. Wonderfully entertaining and laugh-out-loud funny, this selection of tales from the world of the movies is vintage Moore at his very best.

Last Man Standing is published on September 4th but you can now pre-order a hardcover copy complete with bookplate hand signed by Sir Roger himself. You can also buy the signed bookplate seperately if you wish to purchase your own copy of the book.