Earlier this week shooting on location in Obertilliach, Austria wrapped and the main unit for 007's 24th adventure, SPECTRE, returned to Pinewood studios.

Here on the newly-build Q Stage, Mendes continued work on scenes set in Austria with his cast and crew.

The official @007 twitter feed posted a sneak peek of the interior set lined with a Austrian mountain backdrop. 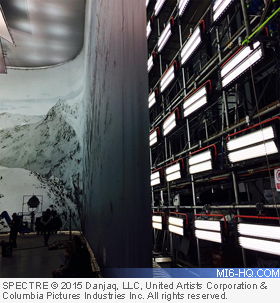 It is particularly apt that some of the work doubling for the Austrian alps is to be shot on Q-Stage after it was revealed in the Austrian press that Ben Whishaw was on location in Austria for scenes with Daniel Craig.

MI6 understands that casting calls for some smaller roles are still out and that, now the production has returned to the UK, these roles are to be finalised.