A wide casting call has opened in Mexico to fin extras to appear in scenes set in Mexico.

Although the dates for the Mexican leg of the shoot have yet to be revealed to the world's media, casting in Mexico City commences 5th February and is expected to take up to three days.

The casting agency Facebook page reveals large signs positioned near the assembly point confirming the call is for "JAMES BOND 007." 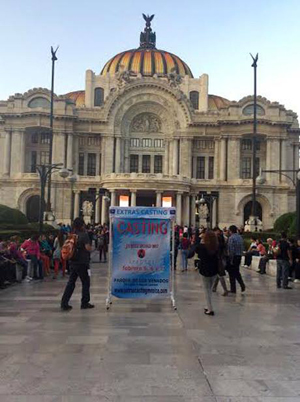 Recruits-people have also been spotted handing out flyers wearing 007-themed teeshirts. Given the large amount of publicity around this casting call, it is likely a sizeable crowd of extras is required for the shoot.