Bond fans can rejoice or despair as Daniel Craig steps out of character tonight as 007 to appear in a documentary style Red Nose Day skit for Comic Relief.

Aired tonight to aid poor and disadvantaged people across the UK, the charity telethon pulled together some of the UK's most recognised comics, including Lenny Henry, David Walliams, Jo Brand and Sarah Millican as presenters of the seven hour event. 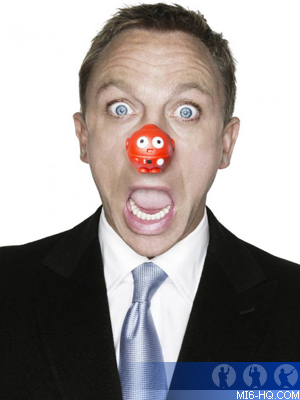 The full show is available for viewing (for those in the UK) on BBC iPlayer, with the Daniel Craig and company sketch coming a little under two hours into the programming.

The skit, for those unable to view it, features Michael Wilson, Ben Whishaw, Naomie Harris and Craig's other colleagues noting his "distinctive" voice and the fact that test audiences pushed for the dubbing of the well-built, manly Bond star because he, quote, "sounds like a little girl."

Thanks to `jamesdut` for the alert.