The United Nations Secretary-General Ban Ki-moon today announced the designation of renowned actor Daniel Craig as the first UN Global Advocate for the Elimination of Mines and Explosive Hazards.

In a brief ceremony held at UN Headquarters, the Secretary-General thanked Mr. Craig for his commitment to support the UNâs vision of a world free from the threat of landmines and explosive remnants of war.

âAlong with moviegoers worldwide, I have been on the edge of my seat watching Mr. Craig, as James Bond, defuse ticking time-bombs with seconds to spare. I am even more excited that Mr. Craig has agreed to use his star power to draw attention to the noble causes of mine destruction and mine awareness,â said Mr. Ban.

The designation is one of a number of events organized to observe the 10th anniversary of the International Day for Mine Awareness and Assistance in Mine Action and the Secretary-General expressed hope that Mr. Craig would raise public awareness about UN mine action efforts, visit mine action programmes worldwide, and assist in raising political and financial support.

Mr. Craig, who has said he looks forward to taking up the Secretary-Generalâs invitation to visit UN mine action programmes in the coming months, added that he was humbled by his designation.

âThe briefing from the Secretary-General, and from all of the United Nations staff I have met, demonstrated the enormity of the task,â he said. âThe use of improvised explosive devices in Iraq, Somalia and Mali; the widespread use of âbarrel bombsâ in Syria, and the landmine contamination in Cambodia, Colombia and Afghanistan must all be addressed simultaneously. It is a big job. The United Nations needs political and financial support to succeed.â 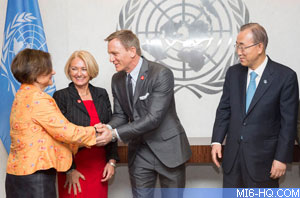 Designation as UN Global Advocate for the Elimination of Mines and Explosive Hazards applies for three years but Mr. Craig has a long standing interest in the global campaign to ban landmines and explosive remnants of war and has already done work for the UN Mine Action Service (UNMAS), narrating two videos for the office in 2014.

The Secretary-General paid tribute to Mr. Craigâs work and that of the Mine Action Service, which has been working to clear mines, educate people on risks, assist victims, destroy stockpiles and advocate for the elimination of landmines and explosive hazards since 1997. 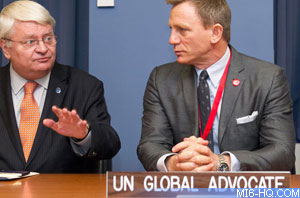 âThe United Nations is playing a vital role in freeing the world from the threat of mines and explosive remnants of war,â said Mr. Ban. âI welcome the support of Mr. Craig to work on these issues. I count on his advocacy to make a difference.â

Thanks to `Samuel` for the alert.