John Stoddart, GoldenEye photographer, to exhibit in Whitstable next month

The photographer who shot Pierce Brosnan for the "GoldenEye" marketing campaign is recreating some of the magic of the Brosnan debut in Whitstable next month.

For seven days from Tuesday 5th of May John Stoddart will exhibit a range of photographs from his long career photographing film and rock and roll legends.

The exhibition will be held at Fish Slab Gallery, Oxford Street, Whitstable.

The centrepiece of the exhibition will be a four foot high photo of Brosnan as Bond. 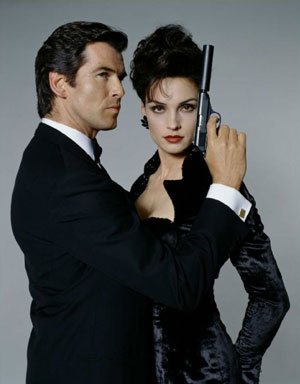 Stoddart spoke to MI6 earlier this month, saying: "It's a small, very nice gallery where I am going to exhibit with Pierce as the centrepiece, the one in profile with the gun. And that stands about four foot tall, itâs almost life-size, the quality is breath taking. Itâs just going to be a collection of my film and rock stars. You have got to do everything to help. Blogs, websites, theyâre all so important in getting the word out."

Of his recent move to the township, the photographer added: "I live in Whitstable now, and itâs still only seventy miles to London, which is where I work. Itâs a strange little place; itâs very trendy, much to the annoyance of the locals. A lot of people like me are moving down. You get value for your money."