Amazon today revealed an audio book version of the Silverfin, the first novel in the new series of Young James Bond adentures by Charlie Higson.

Amazon Canada have now listed the audio book for Â£11.06 ($25.74 CA), although they list the title incorrectly as "Silverfun".

No narrator has been unveiled yet. Back in 2002, Penguin hired British actor Rufus Sewell to read the Ian Fleming series of audio books.

The UK paperback release by Puffin has been announced as 3rd March 2005. The US edition, published by Hyperion Books for Children, is scheduled for release on April 27th 2005. 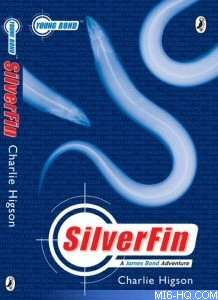 The dark waters around a Scottish castle hold a sinister secret. One man with a thirst for power will use it - whatever the cost. SilverFin is dangerous. SilverFin is the future. SilverFin must be destroyed...
Bond, James Bond.
The legend begins with SilverFin.

The second book in the series is expected in November 2005.