Bond girl Rosamund Pike is having a secret fling with her Pride And Prejudice director Joe Wright - reports the Sunday Mirror (UK). 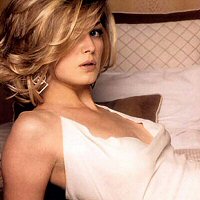 Rosamund, 25, and Joe, 33 - who has previously been linked with former Hong Kong Governor Chris Patten's daughter Alice - have been sharing a room at a Â£500-a-night spa hotel on the outskirts of Marrakesh.

Fellow guests say they have been strolling hand-in-hand in the gardens and lounging by the plush pool at the tranquil hideaway, which has fountains strewn with rose petals.

They were wearing dark glasses and sun-hats as they tried to keep the budding romance under wraps, but were also seen enjoying Arabic and French meals at some of the city's top restaurants.

News of Rosamund's new love affair comes only a week after her former lover, artist Henry John, confirmed they had split after six months. He blamed pressures of work, but added hopefully: "I don't think you have necessarily heard the last of us as a couple yet."

Oxford-educated Rosamund was a hot tip for stardom after she played double-agent Miranda Frost in the Pierce Brosnan James Bond movie Die Another Day. She has spent weeks on location with Joe as he directed Hollywood's latest remake of Pride And Prejudice. The film, due out next year, also stars Keira Knightley, Dame Judi Dench and Spooks heart-throb Matthew Macfadyen.

Rosamund broke up with actor boyfriend Simon Woods last year and is also rumoured to have been seeing TV host Jamie Theakston.

She is due to jet off on a hectic 12-week shoot in Peru for her next film Doom, which will see her fighting aliens alongside US wrestling hero The Rock.

Budding actress Alice Patten was said to have grown "extremely close" to him during filming of the BBC costume drama.