Craig, visiting this country for the first time, said "it's always been a dream of mine to come to Japan, to Tokyo, so I hope to see as much as I can over the next four days." 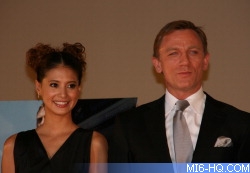 Above: Daniel Craig and model Hinano Yoshikawa at a pre-screening event at a Tokyo movie theater on Thursday night.

Craig, here to promote Friday's Japan opening of "Casino Royale" said he had never dreamed he would be given the role of the spy who is "licensed to kill."

"When I was a boy (I dreamed of becoming Bond), but never as an adult. I'm afraid it was not an acting dream of mine," Craig said. "But when I was a child, I wanted to fly to the moon as well."

Craig said the most enjoyable part of making the 21st and latest installment in the 007 series was "telling the story."

"What we have is a very wonderful love story with me and Eva Green (who plays Bond's love interest, Vespa Lynd)," Craig said. "For me, the two things, having an action story and having a love story were the most fulfilling things."

"I've never done a job as physical as this. I got a bit fitter, a little healthier," he said.

Thanks to `Dog Bond` for the alert.