`You Know My Name` slips to #10 in UK singles chart, but downloads holding steady

The title theme for the new James Bond film Casino Royale has slipped to #10 in the UK singles chart on its third week of release, amidst a rash of new entries attempting to gain the "Christmas #1" crown.

Last week, "You Know My Name" rose to #7 after entering the chart at #12 on download sales alone the previous week.

The theme by singer-songwriter Chris Cornell, co-written by the film's composer David Arnold, went on sale on iTunes a few weeks ago and was riding high at #4 in the official UK download charts. It then slipped down to #8 in the download charts on its second full week and has remained there on its third week on release. 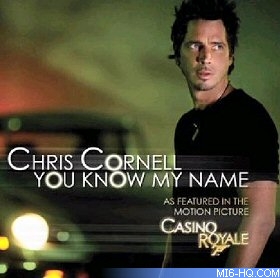 The single is available to order now. .