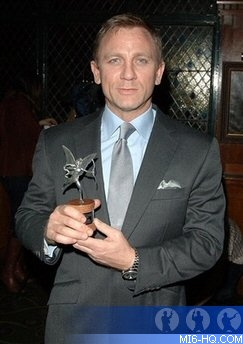 Craig was named best actor for "Casino Royale," his debut outing as James Bond. Craig, who has won both critical praise and box office favor as the first blond Bond, is also up for the best-actor prize at next week's British Academy Film Awards.

Mirren, who is an Academy Awards favorite for her turn as Queen Elizabeth II in "The Queen," lost the best actress prize to Judi Dench, awarded for her portrayal of a predatory schoolteacher in "Notes on a Scandal."

The best-film prize went to "United 93," Paul Greengrass' harrowing dramatization of the final flight of one of the planes hijacked in the Sept. 11, 2001, terrorist attacks.

Peter Morgan won the screenplay award for two scripts - "The Queen" and "The Last King of Scotland."

Stephen Frears, director of "The Queen," received a special award for "for making British film reverberate around the world." The veteran director's socially conscious films include "My Beautiful Laundrette," "Dangerous Liaisons" and "Dirty Pretty Things."

The Evening Standard awards are sponsored by London's afternoon newspaper and selected by a jury of film critics.

Thanks to `beano` for the alert.