Legendary production designer Peter Lamont, who has worked on 18 James Bond films to date, has confirmed some points about the 22nd 007 adventure - reports a French fansite.

Daniel Craig's second outing, due out on 7th November 2008, will be a direct continuation from the events of Casino Royale according to comments made by Lamont at the Festival of Valencians in France this week (celebrating the legacy of Pinewood Studios). It will be the first time in the Bond series that a film will be so closely related to its predecessor. 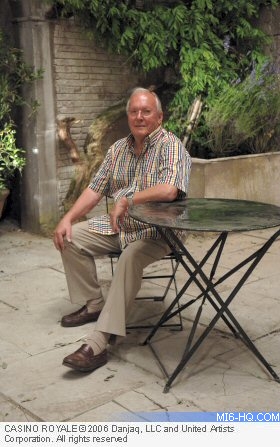 Above: Peter Lamont on the piazza he designed for Casino Royale (built on the 007 stage at Pinewood Studios).

Lamont also confirmed that the new 007 Stage, which is being rebuilt after last year's fire, will be slightly larger than the original.

Click here to read an interview with Peter Lamont about his work on Casino Royale.