The DBS, previewed in the latest James Bond film, Casino Royale, supplants the Vanquish but is based on the DB9. You can see it in the carâs size and basic shape; it uses the same âVHâ modular component set as the DB9 and V8 Vantage, and is built at the same Gaydon factory. 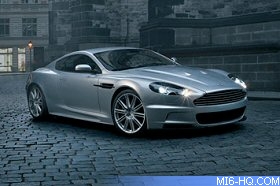 But it is not a replacement for the DB9, which hasnât even reached mid-life. Aston boss Ulrich Bez describes the new model as the culmination of the DB bloodline, designed to bridge the gap between the DB9 and the Le Mans class-winning DBRS9 racer.

The kerb weight is cut by around seven per cent (120kg) by fitment of lighter seats, lighter brakes and carbonfibre panels, and the carâs overall gearing has been lowered. This, more than any power enhancement, makes the DBS the fastest production Aston ever - the 0-62mph sprint takes 4.3sec, and the DBS will do 0-100mph in 9.4sec. Top speed is 191mph.

Design director Marek Reichman describes the DBS as âa true tough guyâ. It is lower (by 20mm), wider-tracked (by 20mm at the front, 40mm at the rear), more aggressive and more muscular.

At the front is a new bumper with square corners, a larger intake for engine-cooling air and twin brake ducts to provide extra flow to the new ceramic brakes.

Carbonfibre winglets improve front downforce and allude to the fact that the bonnet, doors, door surrounds and boot are all made from weight-saving carbonfibre.

The front wings are reshaped for a more muscular look and to move the headlights slightly forward to clear the bigger wheels. There are more-aerodynamic mirrors and sculpted sills that allow cleaner airflow.

The rear fenders grow to give the car more aggressive haunches, thereâs a prominent but neat-looking rear lip and a new carbonfibre diffuser.

Inside, the DBS uses a new range of higher-quality materials. The cabinâs most eye-catching feature is a new all-alloy centre stack, complete with a crystal slot for the new, crystal key.

The DBS uses a newly tweaked version of Astonâs familiar 48-valve 6.0-litre V12. The changes give the engine a bit more zest above 5500rpm, but they donât really show in the maximum outputs: 510bhp at 6500rpm and 420lb ft at 5740rpm. Thatâs less than the Vanquish S, but the DBS is cleaner.

The other big powertrain news is the adoption of a six-speed manual gearbox. The DB9 comes as standard with an adapted ZF auto, controlled by a paddle shift.

New carbon-ceramic brakes improve overall retardation and fade resistance, and reduce unsprung weight. Thereâs a new, two-stage stability control, with a special track mode between Normal and Off that allows the car to slide quite luridly, without spinning.

Springs, suspension bushes and anti-roll bars are all considerably stiffer, and are tamed by a new set of Bilstein adaptive dampers, which vary their rate between stiff and very stiff according to speed, road surface and steering input.

The DBSâs high-tech features promise good things for Astons of the future. Tantalisingly, its close relationship to the DB9 does seem to leave room for an even more exalted model. Ulrich Bez wonât confirm anything of the sort, but itâs hard to believe such a plan isnât in his thoughts.