The long and winding road of "GoldenEye 007" rumours looks likely to take another twist and turn next week.

In recent months, stories have circulated that a team at Microsoft had reworked the classic N64 James Bond videogame for Xbox Live Arcade. According to reports, Nintendo nixed the project at the 11th hour over a financial dispute.

Just when the prospect of a re-release of the best-selling 007 game looked unlikley, Xbox World magazine reheats the excitement.

"Next Wednesday, in Xbox World 360, you'll find the first ever shots and definitive hands-on details behind one of this year's biggest stories. Yep, it's the story the whole world wanted, but only we got - and we unleash it next Wednesday in Xbox World 360. Will you be excited? Oh yes. Will you, like us, be just a little bit angry too? Mmmm, maybe. Want to know more? The mystery unfolds - in shops - in seven days time."

The magazine's website has released teaser 'jigsaw pieces' of a screenshot from the game, which someone has collected to form the image below. This is clearly a screenshot from an updated graphics engine showing the first mission from "Goldeneye 007". 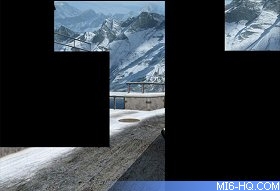