License to drive or license to kill?

Kurylenko, 28, drives the car in the new James Bond film "Quantum of Solace", scheduled for release in the U.S. next month. Ford got its Mondeo into the last Bond installment, 2007's "Casino Royale."

Click here to watch her introduce the car and some clips from "Quantum of Solace" (via YouTube). 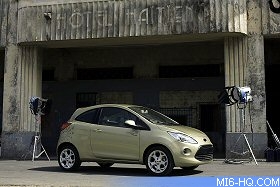 John Fleming, CEO of Ford Europe, said he gave Ka's designers a challenge: "Deliver a vehicle that is great to look at, cheeky, cute, great to drive, great to sit in, great fuel economy, really good value for money. Put that all in a new modern package, and don't lose one customer, actually deliver more to us."

The Ka is to be launched in major European markets by late this year or early 2009. It will be available in both gasoline and diesel models, and Ford says its carbon dioxide emissions will be less than 120 grams per kilometer.

Ford hasn't announced any plans to sell the car in the U.S.