A plumber who built a 15ft flame thrower on the back of his scooter has been arrested for firearms offences - after police saw pictures of him allegedly riding it on a road, reports the Mirror.

James Bond fan Colin Furze, 30, unveiled his anti-tailgating device this week saying it was built just for the fun of it. But police arrested him on Thursday after seeing press pictures of him allegedly riding the souped-up scooter on a highway. 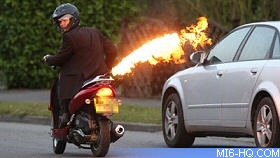 He was released on bail without charge while police investigate.

Devastated Colin, from Stamford, Lincs, didn't want to comment. The daredevil, whose stunts include a 16ft wall of death, had said this week: "I'm not going to set fire to cars, it's just something interesting to do."