In an early alert to retailers MGM (distributed by FOX) has announced plans to bring the classic 1968 film âChitty Chitty Bang Bangâ to Blu-ray Disc on November 2nd,reports HighDefDiscNews.

Tech specs-wise so far all we know is that this will be a âcomboâ release apparently in BOTH Blu-ray & DVD style packaging options with the Blu-ray Disc and the DVD included in each. Further tech specs and bonus materials have not yet been detailed, but stay tuned and weâll keep you updated once the studio makes an official press release. The title is already available for PRE-ORDER over at Amazon with a $31.49 price tag. 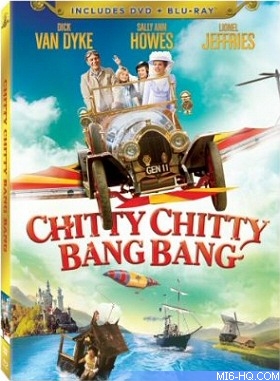 The 1968 film is Directed & Co-Written by Ken Hughes, with the additional screenplay Writing credit of Roald Dahl, and additional script dialogue written by Richard Maibaum. The film is based on the Ian Fleming novel âChitty Chitty Bang Bang: The Magical Carâ. The film stars Dick Van Dyke, Sally Ann Howes, Lionel Jeffries, and also including Benny Hill. The film was also Co-Producer, along with Hughes, by Albert R. Broccoli, who also Co-Produced the âJames Bondâ film series (which was also founded by Flemingâs novels). The film is also notorious for its musical soundtrack, with music composed by Irwin Kostal, in cooperation with musical numbers created by Dee Dee Wood and Marc Breaux.