Rosamund Pike talks about her time on 'Die Another Day'

Following graduation at Oxford, Rosamund Pike was considering a job at Waterstoneâs when she landed the role of double agent Miranda Frost in Die Another Day, with Pierce Brosnan - reports the Daily Mail.

âI was so clueless that I turned up for the audition with one of my motherâs concert dresses â which my grandmother had made and altered to fit me â an 80s taffeta confection with huge shoulder pads. The woman in the costume department took one look at it and tactfully said, âGosh, that is a very beautiful dress, but I think weâre going to go with something like this,â and poured me into a white sheath.â 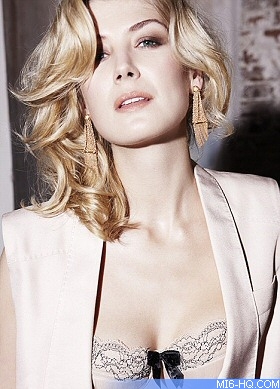 Her brush with Bond gave her a taste of the high life as she was sucked into the 007 machine â plenty more glamorous sheath dresses where that one came from, first-class air travel and international movie premieres. It might easily have gone to her head.

âNot at all,â she says, with a touching air of anguish. âI was too busy agonising over whether I was good enough. I still know all the lines from my scene with Judi Dench who plays M, because for the next ten years I went over and over them in my head, wishing Iâd delivered them differently.

Thanks to `danslittlefinger` for the alert.