A 'letter' from Sean Connery to Steve Jobs was a top trending topic on Twitter today thanks to an unwitting tweet from a marketing executive who thought it was genuine.

The phony letter, in which 'Connery' uses some salty language to rebuke approaches from 'Jobs' to advertise his Apple products was tweeted seriously by John Willshire and was quickly picked up by thousands, many of whom did not get the joke either.

The fake Connery wrote: "I have no interest in 'changing the world' as you suggest. You have nothing that I need or want. You are a computer salesman - I am fucking JAMES BOND!" 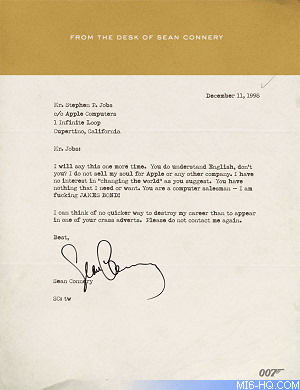 Spoof Apple news site Scoopertino originally published the joke letter on Sunday as part of a satirical look back to Apple's marketing concerns in 1998. The fake advertisement used in the article is actually a Photoshopped version of a real Connery print ad for Jim Beam bourbon.