Former Bond girl Lana Wood, who played Plenty O'Toole in the 1971 James Bond film "Diamonds Are Forever", as given a lengthy interview to the Daily Mail where she talks about her life, career and family.

Of note to 007 historians is her first-hand account of the Connery affair, and her feelings on having her part cut substantially in the editing room.

So who made the first move? "He did. I was never that forward. We went out to dinner, then met some of his friends, then went for a walk, and you know. We actually started having an affair before filming began, but we kept it secret. Neither of us was married at the time, but it still isnât done to be public about it. I remember being very embarrassed when we had to do the love scenes, because we were trying not to let people know You want to be a good actress, but for it not to seem too convincing." 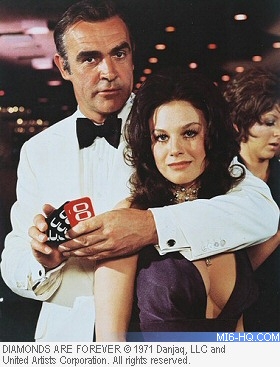 "I think anyone would be hard-pushed to resist Sean. I do find it funny that I felt such a need to be honest and upfront with him, telling him that I couldnât keep seeing him once we finished filming. As if he was even thinking about that! He was probably laughing away to himself. "

No prizes for guessing who she thinks made the best Bond: "Sean. Every time. I do love Daniel Craig, too, though. Sean was a ladies man, but there was an edge to him that the character required, then. He didnât have the softness that some of the other Bonds had. The others were fairly lacking, I think. Until Daniel Craig. The bonus with Craig is that he doesnât have to wear a toupe for the part. "He hated it," she laughs. "He absolutely hated having to wear it." 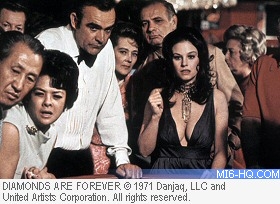 On the subject of the 'Bond girl curse', where careers come to a screeching halt after their appearance opposite 007 (something that is somewhat overplayed by the media), she said, "It is true that the Bond role didnât open the doors I maybe thought it would. In fact, it didnât open any doors at all. All I was offered were sexpot roles, and you canât be doing those for ever. I did suffer from being stereotyped."

"We were incredibly well looked-after on the set. I filmed in Las Vegas, and then Palm Springs, but glamorous it wasnât. I had to be thrown into a pool at 3am, then go through the rigmarole of getting my hair and make-up redone when the director wanted another take. At the time, I was mortified at my part in the film. A lot of my scenes were cut, but I didnât know it until I saw the film. It felt like I bent over to pick up my popcorn and Plenty was dead. I was not a happy camper. I recall thinking: 'Is this what Iâve traveled all over the world promoting?â"

"For a long time, I thought Iâd made a mistake with the character, but no longer. Now, when my life revolves around looking after my grandchildren, if I get a Bond-related invite, I jump at the chance."