Pierce Brosnan visited Newnan in Georgia on Saturday and went on a tour of the historic downtown area, put on by Emily Kimbell, the director of the Newnan-Coweta Historical Society.

Brosnan is in the area to film the DC Comics movie “Black Adam” alongside Dwayne “The Rock” Johnson. Brosnan has the role of Dr. Fate for the movie, which is set to come out in July 2022.

Kimbell said the experience was very fun and unexpected, and that Brosnan was “the nicest guy you’ll ever want to meet.”

“It’s nice to see that someone is genuinely nice,” Kimbell said. “He talked about his family, his wife and his kids. He’s a very nice, genuine person.” 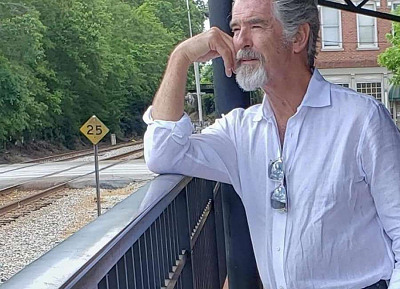 “Last week, maybe Wednesday or Thursday, someone called the office and inquired about having a one-on-one tour on Saturday,” Kimbell said. “They said they were a driver to a Hollywood actor, and they asked to do a historic walking tour downtown.”

Kimbell said when she saw the Hollywood actor was Brosnan, her first thought was the movie Mamma Mia!, the 2008 musical in which Brosnan co-starred with Meryl Streep, and according to Kimbell, Brosnan’s favorite film to make.

Kimbell said she and a volunteer met up on Saturday morning around 11:30 a.m. and gave a tour of the downtown area and its historic district, before stopping by Leaf and Bean for some coffee, where they talked about movies.

From there, it was on to the Train Depot before Kimbell dropped Brosnan off at the Cellar for lunch.

“We walked around for maybe an hour,” Kimbell said. “We spent two hours with him; it’s probably the coolest tour I’ll ever do.”