William P. Cartlidge, who served as First Assistant Director to Lewis Gilbert on 'You Only Live Twice' before line producing two of the biggest James Bond movies, 'The Spy Who Loved Me' and 'Moonraker' has died at the age of 78, following a long illness.

Born on 16 June 1942, William Cartlidge entered the film industry in 1958 at the age of 17. His father, a senior executive for Rank Cinemas, helped him secure a position as a darkroom assistant, developing publicity stills in the lab at Elstree Studios. Cartlidge admitted he was fortunate but amusingly observed, “Nobody has ever accused coal miners of nepotism.” He longed for a position on the studio floor and began his production career as a third assistant director on László Benedek’s ‘Moment of Danger’ (1960) starring Trevor Howard. While under contract at Elstree, Cartlidge climbed the ranks before becoming a first assistant on commercials and television dramas.

Following a commercial for director Michael Truman, the same filmmaker offered Cartlidge his feature debut as a First AD, ‘The Model Murder Case’ (1963), a crime thriller starring Ian Hendry and Ronald Fraser. Cartlidge was still only 19. He left Elstree and went freelance finding regular work in B-pictures, advertising, and television. In 1965, he was invited to meet the head of production at Columbia Pictures in London who assigned him to ‘Born Free’ (1966), the heart-warming true story of a British couple who teach their pet lioness how to survive in the wilds of the African jungles. What was supposed to be a 12-week shoot in East Africa saw Cartlidge wrangling semi-wild lions in Kenya for six months. When producer Carl Foreman’s production office in London enquired why the film was so behind schedule, Cartlidge flippantly cabled, “We issue the lions a call sheet every night. They either eat them or shit on them. But either way, we are doing our best.” 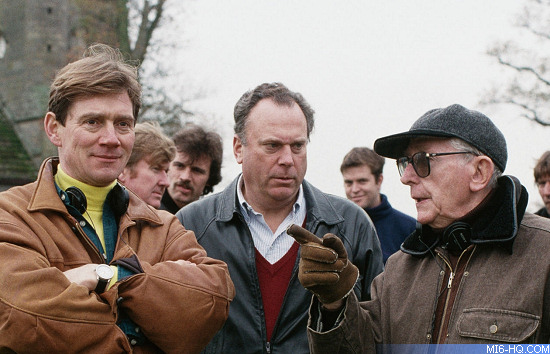 Above: Anthony Andrews, co-producer William P. Cartlidge and director Lewis Gilbert on the set of the film 'Haunted' (1995).

‘Born Free’ was a critical and commercial success and upon his return to the UK, Cartlidge was introduced to veteran British director, Lewis Gilbert, who was looking for a new first assistant for his next picture, ‘Alfie’ (1966). They met in the director’s office, at the top of the Plaza cinema in Lower Regent Street. “Lewis was quite an eccentric in a number of ways. The only way to get to this office on the seventh floor was by the projectionist’s tiny lift, which was not designed for people but for lifting film cans.” Gilbert was 22 years his senior but they hit it off immediately. “It turned out we had the same naughty sense of humour. He effectively became like a second father, a mentor.” Michael Caine’s performance as the chirpy cockney launched him into a movie star and the film was nominated for five Academy Awards including Best Picture for Gilbert.

‘Alfie’ caught the attention of Cubby Broccoli and Harry Saltzman who hired Gilbert to helm, 'You Only Live Twice'. The director immediately asked his new right-hand man to join him. Cartlidge told Ajay Chowdhury and me when researching Some Kind of Hero: The Remarkable Story of the James Bond Films, “Everybody thought I was far too young to be doing it – which of course I was. I was the youngest first assistant in the country at that time. Lewis insisted. I’m sure Lewis had to persuade Broccoli and Saltzman to hire me. Let’s face it, he was trying to convince them to take on a 24-year-old kid to floor manage a James Bond film. The great thing about being young is you think you are immortal. I had never done a big action picture in my life!”

One of Cartlidge’s first tasks was to produce a shooting schedule. 'You Only Live Twice' was a big movie, with gargantuan sets, exotic locations, and a star who was becoming increasingly frustrated with how long each successive Bond was taking to shoot. “I was told Sean Connery had a contract for 16 weeks. Well, there was no way we could make this film in 16 weeks - James Bond films were very complicated. Incidentally, we went five weeks over.”

Cartlidge recalled shooting on Ken Adam’s volcano set built on the backlot at Pinewood, “We’d turn up in the morning to start shooting and it was so big this stage that actually on more than a few occasions you couldn’t see to the end of the set because it was full of fog. We had to import these bloody big gas heaters, about fifty of them, blasting away from about 7 am so we could change the temperature enough to dispel the fog.”

Gilbert’s career had taken a stumble following the box office flop of the hugely expensive, ‘The Adventurers,’ so an offer from Cubby Broccoli to return to the Bond franchise was appealing. Again, Cartlidge was not expecting to join Gilbert, “It is one thing for a director to ask for his first assistant to be on a movie but it’s an entirely different kettle of fish to ask your co-producer to be the associate producer which is effectively a line producer on a Bond. He said ‘No, no I’ve asked for you.’”

Cubby Broccoli was now producing solo, following his split from Harry Saltzman. In 1976 Cartlidge joined Broccoli at Eon’s Mayfair headquarters to begin work on 'The Spy Who Loved Me' (1977). “Very quickly Cubby let me get on with it. He always supported everything that I suggested that we would do and not do. His office was always available to me.” 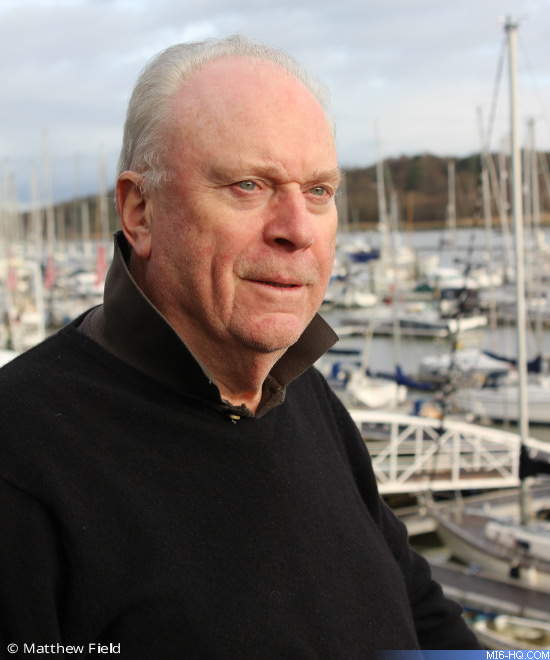 'The Spy Who Loved Me' filmed on location in Egypt. Cartlidge described the location as an “…absolute nightmare. It’s the only place I’ve ever made a Bond film where we’ve come in under schedule and under budget because everybody wanted to get out as quick as possible.” As Cartlidge prepared to move the unit out of Cairo, the Egyptians attempted to blackmail the production at the airport by refusing to release the film cans. Cartlidge was not leaving without his canisters and gathered the 50 strong unit together to protest, “We buggered up Cairo Airport’s schedule and we all sat there until we physically saw our film come out of customs and made sure it hadn’t been tampered with.”

Following the success of 'The Spy Who Loved Me', Broccoli retained his key production team for his next installment 'Moonraker', which included Gilbert and Cartlidge. With crippling tax rates in the UK, Broccoli had left London and relocated to his home in Beverly Hills. Cartlidge recalls EON explored the possibilities of basing the film in Los Angeles. “We probably would have shot it at MGM Studios but Cubby wasn’t convinced about doing it there. We had just built the 007 Stage – were we going to abandon that and all the investment?” Cartlidge and Gilbert had produced ‘Seven Nights in Japan’ as a Franco-British co-production. They suggested ‘Moonraker’ be shot in France where they could build sets at Boulogne Studios, Studios Cinéma, and studios d’Epinay sur Seine, and post-production and effects could be completed at Pinewood allowing the picture to benefit from tax incentives in Britain and France.

Cartlidge found himself under extreme pressure when budgeting 'Moonraker'’ which had a final cost of $33million. When asked what the most expensive aspect of a James Bond film was, Cartlidge would reply without hesitating, “Ken Adam sitting there with a sheet of blank paper and a charcoal pencil.” However, once production was underway, Cartlidge said he never worried, “The budget had been agreed, so you weren’t worried about the cost and in fact, even if it was costing more, United Artists would go ‘Oh Christ…. alright.’ You had no difficulty producing the picture. If you wanted to shoot up and down the Grand Canal in Venice…well you can do it.”

How they did it, Cartlidge had to explain to UA executives Andy Albeck and Steven Bach who could not understand the line in the budget – ‘special location facilities.’ “They kept picking away at me and it went on a while. I used every bloody euphemism I could bloody well think of. ‘Fuck it – it’s for bribes!’ Well, they nearly fell off the bloody chairs. I said, ‘In the script, we’ve got a gondola doing 65–70mph down the Grand Canal. Do you know what the speed limit is there? Six knots.’”

Location work also took Cartlidge to Rio where he secured the cable cars on Sugarloaf Mountain for a key action sequence. He negotiated a deal with two brothers who purportedly owned the business, “However, their father starts to look through the storyboards and realises his precious cable cars crash. When the film comes out nobody will go on his cable car again. The father actually owned the company and locked us out.” Cartlidge solved the situation with an invitation, “’I’d like to bring you and your family to England to the royal premiere.’ Do you know what happened? He died. So that’s how it resolved itself.”

Following 'Moonraker' Lewis Gilbert returned to his own projects and Cartlidge joined him in making, amongst others, the critically lauded, ‘Educating Rita’ (1983). They continued working together into the mid-1990s. Cartlidge then produced his own work, which included the TV series ‘Dinotopia’ (2002-3). He directed his one feature, the romantic comedy, ‘An Ideal Husband,’ in 1999 starring James Wilby and Sadie Frost. 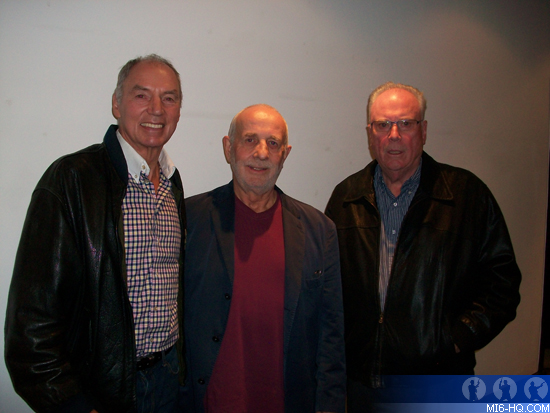 Cartlidge spent his retirement in Hamble on the south coast of England where he enjoyed sailing. His friend and colleague, John Richardson, paid tribute, “Bill was wonderful to work with, he always spoke his mind and he had a wonderful sense of humour which was infectious. He was a great raconteur, and he could usually manage to see the funny side of any situation which is a particularly useful trait when working on long film locations overseas.” Robin Browne who worked on the optical effects of both ‘Spy’ and ‘Moonraker’ also attended Highgate School with Cartlidge in the early 1950s and said, “Bill should be remembered as a great sailor. If you are the captain heading across the Atlantic or heading up a multi-million dollar production you have to have your wits about you, Bill certainly did.”

Cartlidge passed away peacefully at his home on the 3rd March 2021. His wife Denise died in 2014. He is survived by his two children, Claire and Ted, and grandchildren Henry, Emily, Wilfred, Samson, and Cecily.