Former EON publicity and marketing director, Charles ‘Jerry’ Juroe, who was involved with the James Bond movies for more than 25 years, died in Spain on 30 September 2021. He was 98.

In 1962, while working for United Artists, Juroe played a vital role in the European publicity rollout of 'Dr. No'. He ended his career working directly for Albert R. Broccoli’s EON Productions, retiring in 1990, following the release of 'Licence To Kill'. 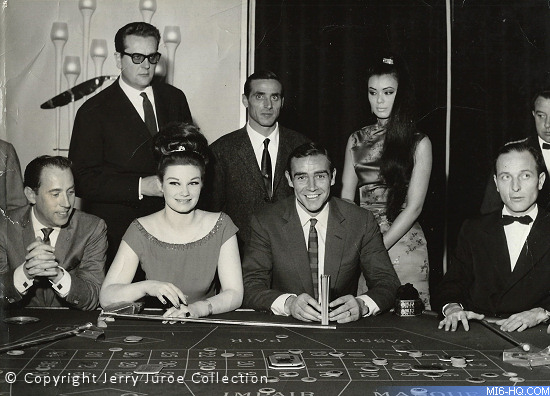 Born in San Francisco on 19 September 1923, Juroe was enrolled at Castle Heights Military Academy in Tennessee at the age of 12. As a child, a family friend was Gregory Peck, seven years his senior. They remained acquaintances until Peck’s death in 2003. Juroe joined the army in 1942 where he experienced his first taste of showbiz, accompanying young actresses, Gloria DeHaven and June Allyson, around select military installations in California, promoting the picture ‘Two Girls and a Sailor’ (1944).

Juroe was sent to Europe where his military duties saw him join the D-Day landing at Normandy on 6 June 1944. To mark the 75th anniversary of the invasion, Juroe’s bravery was awarded France’s prestigious Legion of Honour award, for excellence in military conduct, by president Emmanuel Macron in 2019.

When he left the army in 1945, Juroe never forgot his fleeting brush with Hollywood. He wrote in his memoir, Bond, the Beatles, and My Year With Marilyn, “All I knew was that this was what I wanted to do with my life and that somehow I would make it happen.” Back in San Francisco he secured a job as the assistant manager of a small picture house. Soon Juroe joined the press department of the Fox West Coast Theater Corp and later Paramount Theaters. In 1950, he landed a position in the publicity department at Paramount Pictures in Los Angeles. It was the first of several stints Juroe would undertake at the ‘mount’ during his career. 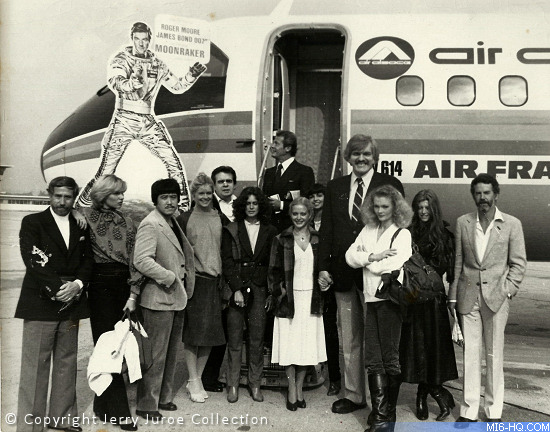 In 1956 Juroe joined Arthur P. Jacobs’ PR agency. His career took him to England where he was assigned the duty of looking after one of Hollywood’s biggest stars, Marilyn Monroe, while she filmed ‘The Prince and the Showgirl’ (1957) with Sir Laurence Olivier. Juroe described Monroe as a unique and enigmatic star who caused much trauma and angst but admitted, “It would be most hypocritical of me if I didn’t acknowledge that, in spite of everything, my time spent with Marilyn is right at the top of my curriculum vitae.” It was via his association with Monroe that Juroe first met Albert R. ‘Cubby’ Broccoli who was an acquaintance of the star’s mentor and lover, Johnny Hyde.

Juroe liked Europe and spent most of his remaining life there. In the early 1960s, he joined United Artists to head up European publicity. At UA, Juroe became immersed in the world of James Bond and was involved in the publicity of the first five films. He recalled seeing Sean Connery’s screen test and thought, “…this is a very ballsy guy.” Juroe took Connery on his first promotional tour across Italy, “I came up with the idea of a blonde, brunette and a redhead to travel with him – Bond was always accompanied by a matched set. UA’s Italian PR people prearranged for this unknown actor playing James Bond to break the bank for real at a major European casino. It all went well with very shady-looking Italian ‘gentlemen’ watching over our every move. The story went out on the wires and, most importantly, broke in the U.S press and even made the pages of one of New York’s top tabloids.”

Juroe accompanied Sean Connery to the Paris premiere of 'Goldfinger': “I had to coordinate Sean’s arrival at the cinema near the Arc de Triomphe with him driving the Aston Martin DB5 and me in the passenger seat. Fortunately, there was no ejection seat and Connery actually made it around the notorious Arc’s traffic so that we pulled up to the front of the cinema with photographers almost as numerous as the crowd. What an experience.” As Bond quickly became UA’s hottest commodity, Juroe found himself, focused on all things 007, “I spent more time over with Cubby and Harry than I did in my own office. They just took over my life.” He would later describe Cubby Broccoli as “one of the finest human beings” who was an “honour and privilege to know.”

While at UA, Juroe was involved in the publicity of another sixties, phenomenon, The Beatles. When the fab four were on location in Austria, Juroe devised the idea of photographing the band on a snow-capped mountainside holding their arms out in the shape of the semaphore, spelling, H-E-L-P, the title of their second movie. That photo became the focus of the film’s publicity campaign. 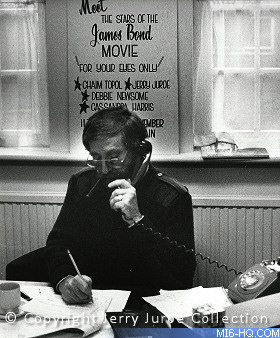 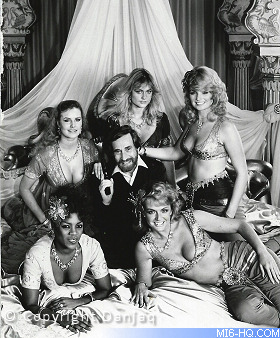 Juroe returned to the Bond fold in the early 1970s when Broccoli hired him to undertake publicity duties on 'The Man With The Golden Gun', a position he would repeat again on 'Moonraker'. In 1980, he joined EON Productions full time, as director of publicity, employed under the banner of another of Broccoli’s entities, Warfield Productions. It was Juroe who recommended French actress Carole Bouquet for the role of Melina Havelock in 'For Your Eyes Only'. For 1983’s 'Octopussy' Juroe wrote and directed a fascinating behind-the-scenes film, ‘James Bond In India’ which can be found on the special edition Blu-ray/DVD.

From 'A View To A Kill' onwards he was credited as director of marketing. Juroe enjoyed working with Roger Moore immensely, “When it came to selling a film, no one in the promotional field could hope for a more professional and cooperative star than Moore. He was truly a publicist’s dream.”

In 1986 Pierce Brosnan was announced as Roger Moore’s successor. Juroe told documentary filmmaker, Stevan Riley, for his retrospective film, ‘Everything or Nothing’ (2012), “I was with him in LA to handle the announcement and we were going to have this big press conference and Pierce was just the happiest person you could be.” At the eleventh hour, NBC Universal, renewed Brosnan’s contract for a further season of his hit TV series, ‘Remington Steele’. For now, the role of Bond eluded him. Juroe remembered, “…the man was absolutely shattered.”

Instead, Timothy Dalton became the fourth incarnation of James Bond, and Juroe was tasked with unveiling the Welsh actor to the world, “I quickly realised that Dalton was not only very serious about his profession but that he was someone who reluctantly accepted that publicity and promotion had to be a necessary part of being James Bond.” Despite Dalton’s reservations, the actor became a close, personal friend of Juroe’s. “Timothy Dalton was a very, very good Bond. You saw him acting on the set and you thought, ‘Gee! That’s something!’ But somehow or other the public just didn’t buy it. How do you explain something like that?” In 1994, Dalton pulled Juroe out of retirement and flew him out to South Carolina, where he was shooting the TV series ‘Scarlett’, to handle the press announcement that he was stepping down from the role of 007. 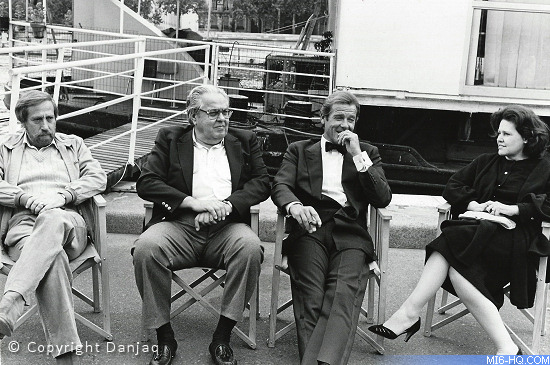 In his book, Juroe reflected fondly on his life traveling the globe with 007; to the Ginza of Tokyo with Cubby Broccoli, a voyage on a Chinese junk with Desmond Llewelyn, into the Australian outback with Patrick Macnee and Tanya Roberts, the jungles of South America with Richard Kiel and Corinne Clery, the beaches of Rio with Lynn-Holly Johnson and Sydney Harbour with Cassandra Harris and Topol. “Wherever there were newspapers, magazines, or radio and TV stations, there we were with some permutation of Bond personalities spreading the mantra of one very special secret agent to a waiting world.”

Juroe retired to Spain and was succeeded by marketing director, Gordon Arnell. He was never far away from his Eon family and was a regular at Bond events and premieres. Proud of his work on the 007 franchise, he once told Bond historian, John Cork, “As long as people are born and the human race progresses there will be new audiences for new James Bonds. I really feel that James Bond is forever.” Juroe had been in poor health for some time and in August of this year placed an ad in trade publication Variety publically expressing his deep appreciation and affection for the Broccoli and Wilson families. 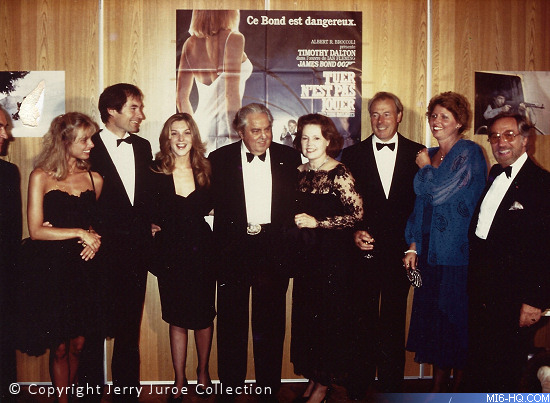 During the publicity tour for the latest Bond film, 'No Time To Die', 007 producers Barbara Broccoli and Michael Wilson remembered their colleague and friend, “He made a huge contribution to the success of the series.” LA-based writer-producer, Mark Cerulli, who assisted Juroe with his memoirs, remembered fondly, “He was a dear friend to me since 1981. I was a young American Bond fan and I wrote a gushing letter to EON, which Jerry answered. I was in college at the time and he invited me out to Pinewood for an unforgettable visit.” Doug Redenius, a founder of the Ian Fleming Foundation, who also worked on Juroe’s autobiography, paid tribute, “Jerry was a giant in the film business during the Golden Age of Hollywood. A formidable publicist who took what he did, as seriously as he took his time during the war years - failure was not an option. He was my mentor, my hero, and like a second father to me for nearly 40 years.  There will never be another one like him.”

Charles ‘Jerry’ Juroe was married to actress Lynn Tracy for 42 years until her death in 2001. He is survived by their daughter, Kim.