Cameron described his desire to travel driving him toward a career in the Merchant Navy, whereupon he served aboard voyages to New York and to South America. World War II brought Cameron to the UK, arriving in London on 29 October 1939. “The degree of racism in England didn’t surprise me. I had grown up with it [in Bermuda],” Cameron told the Bermudian based Royal Gazette in 2018.

He was since credited with breaking down racial barriers in British screen production. A host of black British celebrities paid tribute to Cameron on his death, including David Harewood and Patterson Joseph. But he never saw himself as leading a movement and it was only in his older years that he recognised the significance of what he achieved. “Unless it was specified that this was a part for a black actor, they would never consider a black actor for the part,” he told the Guardian of his struggle to get cast in significant roles.

He began working as a kitchen hand in London before his friend arranged for him to be cast in a West End production of musical ‘Chu Chin Chow’. After the Second World War, Cameron toured in theatre productions to entertain the British troops in India.

Cameron made his screen debut in 1951, appearing in post-War crime drama ‘Pool of London’, directed by Basil Dearden (perhaps best known to Bond fans for helming a trio of ‘Persuaders!’, the Roger Moore starrer). Cameron’s character was involved in one of the first ‘mixed-race’ relationships shown on British screens.

He was considered for the role of Bond’s ill-fated ally, Quarrel, in 'Dr. No' but was overlooked in favour of John Kitzmiller. Three years later he would take the smaller part of Bahamian ally, Pinder, who aids James Bond on his mission to prevent Largo triggering nuclear bombs in Miami. 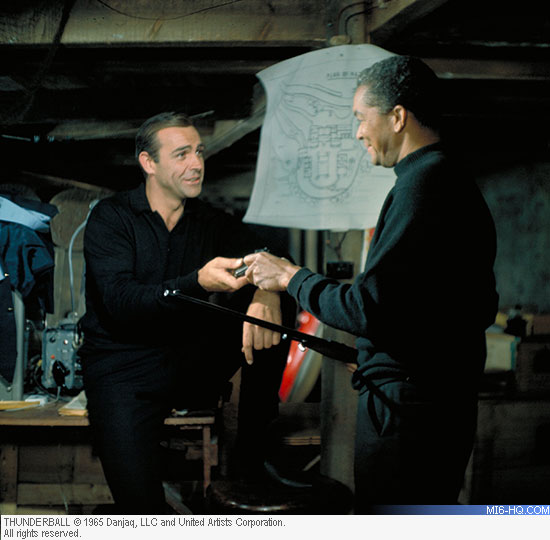 It was around this time he converted to the Bahá’í Faith, a sort of pan-religion, seeking to unify and create peace between all faiths. His work with this movement took Earl to places like the Solomon Islands in the Pacific. Here he established a Bahá’í community and ran an ice cream shop from 1979. Upon the death of his wife in 1994, Cameron returned to acting to keep busy.

In 2005 he was an honoured guest of MI6, Cinema Retro and BondStars, when we co-hosted an event celebrating the 40th anniversary of ‘Thunderball’. He appeared on-stage with Bond alumni like Sir Ken Adam, Norman Wanstall, and Don Black, as well as co-stars Mollie Peters and Martine Beswicke.

He continued to take screen roles, including in a couple of more prominent Hollywood pictures well into his 90s. He finally retired in 2013.

That same year the legendary actor was offered an honorary doctorate degree from Warwick University. Cameron was honoured with a DLitt for ’distinguished men and women who have made important contributions to cultural, intellectual, social, economic or political life’.

“It is quite an honour indeed and I must admit it came as a tremendous surprise to me to be asked,” the 95-year old told the presses at the time.

The actor passed away peacefully in his home. Cameron is survived by his wife Barbara Bower, and six children. His family made the following statement: “Our family have been overwhelmed by the outpourings of love and respect we have received at the news of our father’s passing. As an artist and as an actor he refused to take roles that demeaned or stereotyped the character of people of colour. He was truly a man who stood by his moral principles and was inspirational.”

Thunderball Behind The Scenes