Rémy Julienne who lent his precision stunt driving talents to six James Bond movies has died at the age of 90. The stunt performer was hospitalised two weeks ago in the French town of Montargis. He had been suffering from Coronavirus but he passed away following complications relating to an on-going illness.

Born on 17 April 1930 in the village of Cepoy, in the Loiret, Rémy Julienne was a stunt-driving pioneer who became one of the most prolific stunt drivers in Europe. Julienne, who was once described by the renowned French director, Claude Lelouch, as “a reasonable madman” was riding motorbikes by the age of 12. In 1957 he became the French motocross champion and began a stunt career in film and television with ‘Fantômas’ (1964) and soon earned himself the reputation as the ‘daredevil of French cinema’. He told France Dimanche in 2015, “I was a scared little boy, but I had a taste for risk. Over time, I discovered the real difficulty is finding the right balance between doubt and self-confidence.” 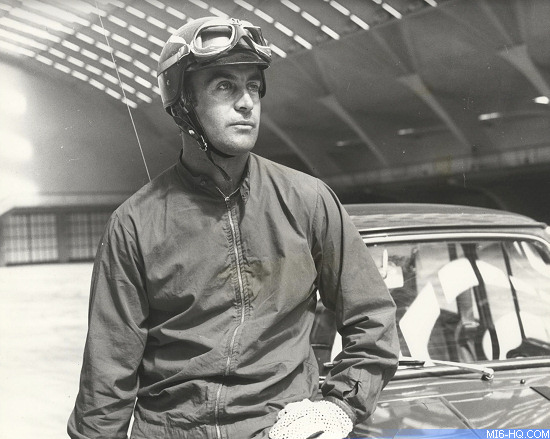 Over the course of a 40-year career, he participated in more than 1,400 productions. At first, he worked alone but soon built up a core team of drivers and mechanics forming L’Equipe Rémy Julienne. In the 1980s, he was joined by his two sons, Dominique and Michel. Julienne worked on a number of Fiat commercials famously driving down a 15-foot waterfall in one ad and through the open doors of a moving freight train in another.

The 1969 Michael Caine crime caper ‘The Italian Job’ was Julienne’s first English-language production and it changed his career forever. The 15-minute finale, in which three red, white, and blue Mini Coopers escape the Italian police through the palazzos, galleries, and rooftops of Turin, has become one of the most famous car chases in cinema history. Remembered Julienne, “I was given a lot of freedom from the director. For me, it was the dream opportunity, to be able to express all my fantasies, my dreams, my ideas.” John Glen remembered Julienne’s talents a decade later when he made his directorial debut with 'For Your Eyes Only' (1981), “The Italian Job was my first introduction to Rémy and his team and I never forgot how skilled they were. It was a science rather than stunts. When I came to the Bonds Rémy did all my car stuff.” 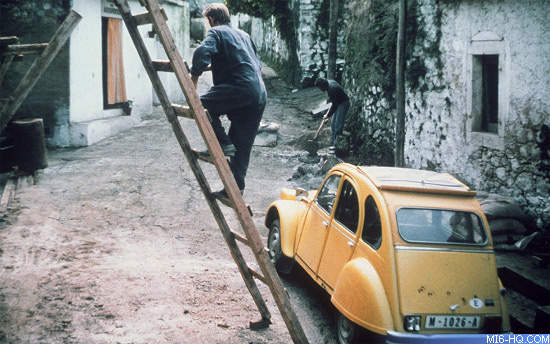 On ‘For Your Eyes Only’ Julienne coordinated an impressive sequence in which Bond outwits his pursuers through the Spanish countryside in a yellow Citroën 2CV under and over the olive groves. He told Ajay Chowdhury and me when researching Some Kind of Hero: The Remarkable Story of the James Bond Films, “They asked me the question, what the most ridiculous car would be for James Bond to drive and still cause panic with the villains. Automatically, I said the 2CV.” Working with Citroën, Julienne oversaw the preparation of a fleet of 2CVs for the sequence, which was in fact, shot in Corfu. “We installed a stronger engine, the Citroen GS, normally it is a 2 cylinder engine, and we installed a 4 cylinder engine.”

Cubby Broccoli and John Glen were so impressed with Julienne they extended his contract on ‘For Your Eyes Only’. They called upon his motocross skills and asked Julienne to oversee the sequence in Cortina in which Bond escapes on skis down a bobsleigh run with a Yamaha XT500 hot on his tail. In his youth, Julienne had gained experience-racing motorbikes on ice and his consultancy was invaluable to both the choice of bikes and their preparation. Remembered Glen, “He spoke very little English at the time but my storyboards spoke louder than words and he understood perfectly what we were trying to achieve.” 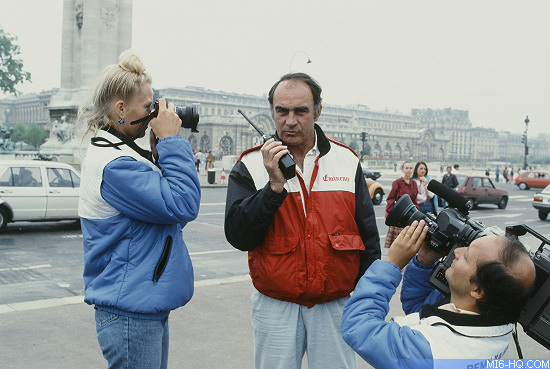 For 'Octopussy' (1983) Julienne’s team, along with the help of special effects supervisor, John Richardson, fine-tuned a number of rickshaws - three-wheeled Tuk Tuks - with Honda 250 engines, for an exciting chase filmed on the crowded streets of Udaipur. The vehicles were capable of travelling at speeds of up to 70mph, “For every stunt, we had a specialized Tuk Tuk, at least five or six.” These vehicles are a staple of Indian life, but the thousands of locals who gathered to watch filming had probably never seen action like it. At one point a cyclist spontaneously spun through the middle of Julienne’s action, but the shot looked so dangerously crazy it was cut into the final picture. 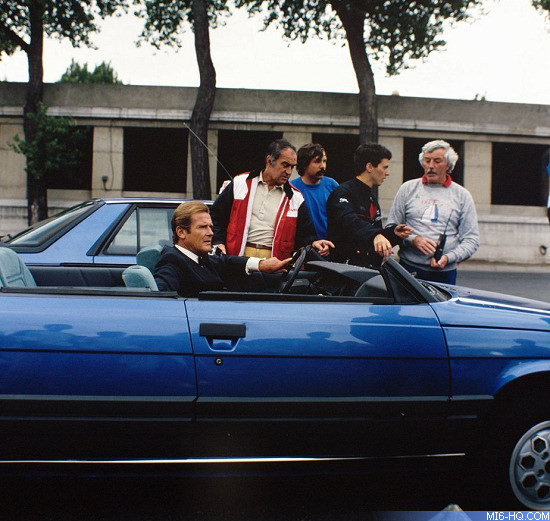 'A View To A Kill' (1985) showcased some of Julienne’s most popular trademark stunts - some seen earlier in ‘The Italian Job’ and the wonderful Jean-Paul Belmondo’s ‘La Casse’ (1971). Bond races after black-clad killer, May Day, in a Renault 11 taxi, ejecting the driver before destroying the car panel-by-panel through the streets of Paris. John Glen recalled how the sequence evolved, “We got together, and we decided what was possible to do with this situation. Then I went away and I wrote it all down and then Rémy separately came to me with a couple of ideas and that’s how it progressed through the sequence. It was all a consultation between Rémy Julienne and me.” Julienne remembered, “Bond drives the stolen taxi up a ramp while a bus passes underneath, and in perfect synchronization, the taxi lands on the bus. It is really a matter of hundredths of seconds. It was really very, very difficult.”

Julienne was involved in a second sequence set in San Francisco when Bond commands the wheel of an American LaFrance fire truck. While shooting in California Julienne recalled the film unit came under attack, “One moment, they tell us all to hide, so everybody hides. Afterward, they told us there was a mad American with a gun, who said, “James Bond, nobody can get him, I will!” So the police captured him.’” 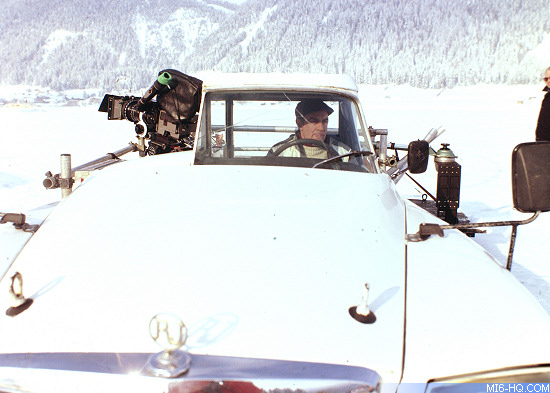 For 'The Living Daylights' (1987) he oversaw the Aston Martin V8 action in Austria. His team also filmed along the precarious roads zigzagging down the Rock of Gibraltar with Bond clinging for his life atop a speeding Land Rover. During production, The Sun newspaper amusingly reported an exchange between two local police officers, one complaining his vehicle had been damaged as a stunt driver moved it out of shot: “Who was it?” “Some French bloke.” “In that case your damn lucky he didn’t drive it over a cliff just for the hell of it.”

Julienne’s most ambitious Bond work can be seen in 'Licence To Kill'(1989) in which he coordinated the climatic finale filmed in the Rumorosa Pass in northern Mexico, in which 5 giant Kenworth tanker trucks race across inhospitable mountain roads. Julienne visited Kenworth’s plant in Seattle where three of the 16 trucks required for the sequence were specially prepared to Julienne’s instructions. One was capable of being driven by remote control, while a second had its steering apparatus hidden in the sleeping compartment so it could perform a wheelie. A third was modified so it could drive on its side balancing on nine wheels. 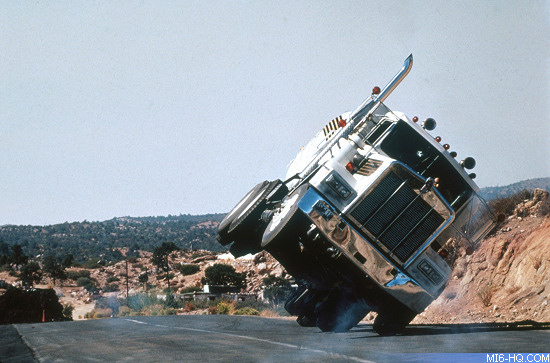 For Julienne’s 007 swansong 'GoldenEye' (1995), he pitted Bond’s Aston Martin DB5 against Xenia Onatopp’s Ferrari 355 around the hazardous hairpin bends in the mountains above Monaco. In reality, the sequence was shot in Gréolières. He recalled to Jérôme Nicod and Laurent Perriot of the French James Bond Fan Club that the challenges this time were the cars themselves, “Although the DB5 is an old wonderful lady it has very low performance, an engine that is not very powerful and uncertain road holding.” Julienne’s team skillfully drove both cars to make them perform equally.

In 2002, Julienne, unfortunately, found himself at the centre of a court case following the death of a cameraman who was struck and killed by a car during the making of Luc Besson’s ‘Taxi 2’. He was found guilty of involuntary manslaughter and was given an 18-month suspended jail sentence and a fine. However, he bounced back and continued to work sporadically with credits including ‘The Da Vinci Code’ (2006). He was also asked to design and co-ordinate a stunt driving attraction at Disneyland Paris.  The Paris Court of Appeal subsequently overturned the verdict and his sentence was reduced when it was revealed that Julienne had previously highlighted the dangers to the production company but his advice had been ignored. 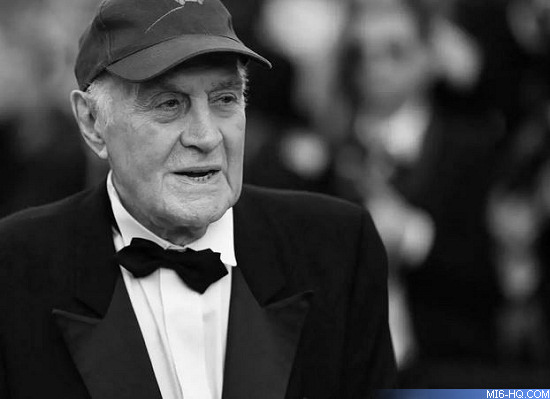 In retirement, Julienne remained active appearing regularly at motoring events across France. Asked about his profession he offered, “You must have constant concern for perfection, precision, and absolute safety while ensuring the wishes of the director are met. My job was to calculate the risks.” John Glen reflected, “He’s an incredible artist really – an artist with cars. He amazed me.”