African-American actor, Yaphet Kotto, who played the corrupt Caribbean diplomat Dr. Kananga who also doubled as the Harlem gangster Mr. Big in the eighth James Bond film, 'Live And Let Die' died on 15 March 2021 in the Philippines. He was 81. Kotto made more than 70 film and TV appearances in a vibrant career spanning five decades. 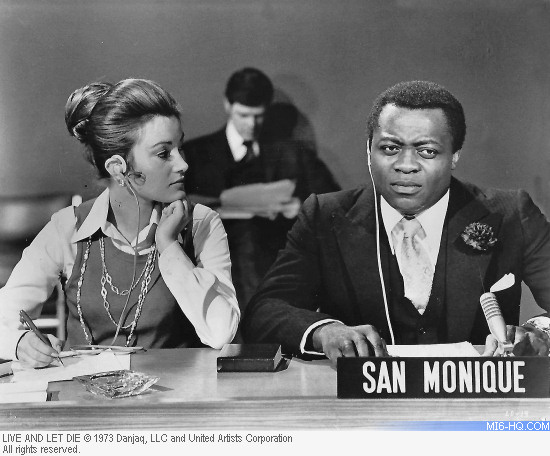 Yaphet Frederick Kotto was born in New York City on 15 November 1939. Raised in the Bronx by his grandparents, while his mother served in the US army, Kotto showed interest in the performing arts from an early age. He once said he was inspired by Sidney Poitier’s appearance in ‘The Defiant Ones’ (1958), “Standing right there on the screen was this tall black man and I said to myself, ‘I could be like him.’”

He joined the Actors Mobile Theater and by 19, had made his Broadway debut appearing in a production of ‘Othello’ and later the musical comedy ‘The Zulu and the Zayda.’ In 1969 he took over the lead role of heavyweight champion, Jack Johnson, in the Tony award-winning production, ‘The Great White Hope.’ 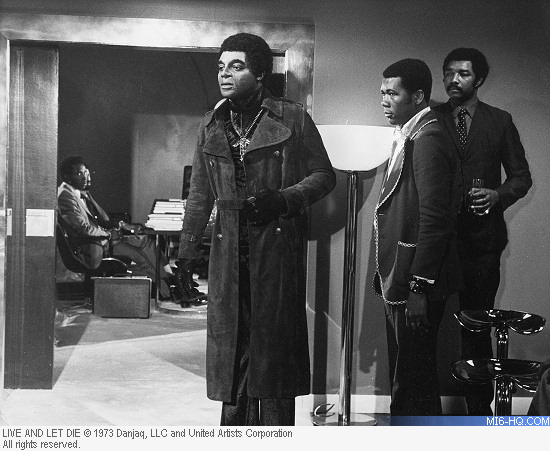 His film and television career began with an uncredited role in the Rat Pack movie, ‘4 for Texas’ (1963). Kotto secured a supporting role in ‘Nothing But A Man’ (1964); Michael Roemer’s Motown fuelled drama of life in 1960s Alabama. Upon its initial release, it struggled to find distribution but has since been regarded as a classic. He told the American journalist Roger Ebert in 1972, “Right away I knew I would have to learn something about diction and speech. I spoke in this very hip Harlem way…so I tape-recorded all of John Cameron Swayze's newscasts and imitated them." Other film roles followed, including a part in the Steve McQueen caper ‘The Thomas Crown Affair’ (1968). Kotto chose roles that he hoped would change black stereotypes in cinema, “One of these movies was ‘The Liberation of L. B. Jones’ (1970) – no one had seen a black man kill a white man onscreen prior to that. That movie created what would later be known as Blaxploitation cinema.” 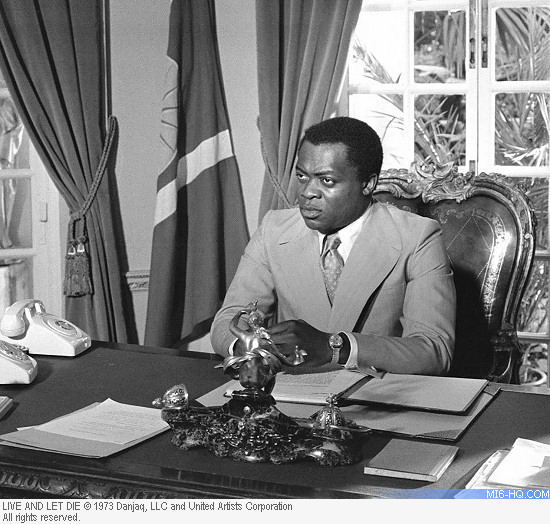 While Kotto was making the thriller, ‘Across 110th Street’ (1972), on location in New York he was approached by United Artists’ David Picker about 'Live And Let Die'. Kotto understood the Bond movie was a great opportunity, “It was a huge break for me and for black actors and actresses in general. There had never been a black villain chasing James Bond before.”

In 2015, Kotto told Ajay Chowdhury and I while researching, ‘Some Kind of Hero: The Remarkable Story of the James Bond Films’ that he initially disliked the script, “It was just too simple. There were too many [lines like] “Hey baby!” We don’t talk like that man, we really don’t. I don’t know where [Tom Mankiewicz] got that shit from. He overloaded it.” Kotto also felt 'Live And Let Die' failed to push the envelope far enough, “If you are going to do a movie and use black and white characters go the whole way. Was [Kananga] having sexual intercourse with Solitaire or not? Yes, he was! Those issues were overlooked. They couldn’t make up their mind how far to go with that.” 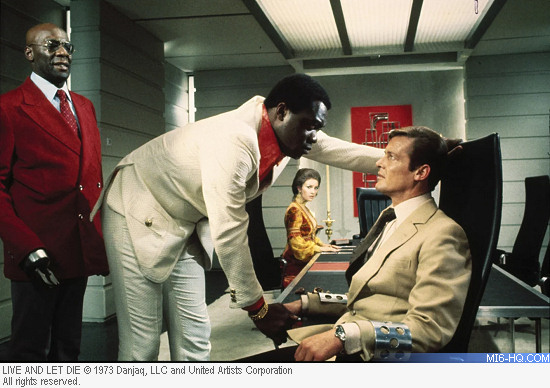 Roger Moore wrote in his ‘James Bond Diary’, published to coincide with the release of 'Live And Let Die' that certain cast and crew felt Kotto had a chip on his shoulder noting, “As a black actor in a predominantly white industry perhaps he believed he had to assert himself.” Years later Kotto responded, “I can see how he would have arrived at that opinion because I was very aloof and removed from everyone. I stayed away from everybody. It may have appeared I had a chip on my shoulder because I was quiet. I am not there to socialise. I think method actors are misunderstood. Maybe he wasn’t used to method actors.”

Kotto had great respect for his producers Albert R. Broccoli and Harry Saltzman. "Broccoli became my father. He was very warm and paternal to me. Saltzman was like Martin Luther King. I said ‘Harry wouldn’t it be great if we had black stuntmen?’ So for the first time in history, he hired back stunt coordinators on the movie. He was so happy to do it. I said ‘Harry you are the greatest.’” 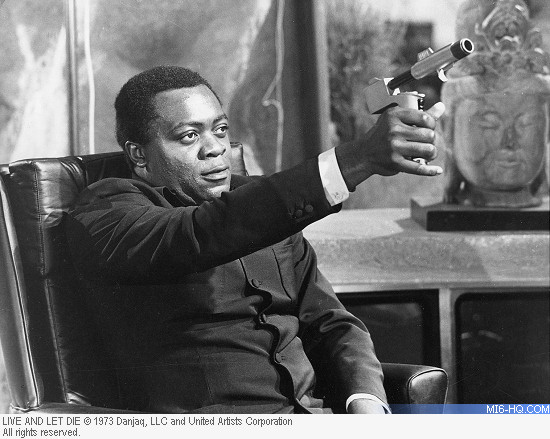 Kotto claimed he was deliberately left out of the film's publicity campaign. "Harry was concerned about the image of an African-American bad guy. When the film opened I was in a Harlem bar on 135th Street because I wasn’t invited to any of the openings. I was very depressed. I was in a bar with my brothers and sisters watching television. I cried a little bit, I got emotional, I was with my people but I wanted to be with [the cast and crew] but the door was closed on my ass.” Despite this sense of ill-feeling, a Daily Variety report from June 1973 confirms Kotto did in fact attend the US premiere.

Kotto told the Baltimore Sun in 1993, “I’m always called powerful, bulky or imposing. Or they say I fill up a room. I’m a 200-pound, 6-foot-3-inch Black guy. And I think I have this image of a monster. It’s very difficult.” However, his portrayal of Ugandan dictator, Idi Amin, in ‘Raid on Entebbe,’ (1976) earned him an Emmy nomination. Another notable performance saw Kotto playing opposite Harvey Keitel and Richard Pryor in Paul Schrader's ‘Blue Collar’ (1978), a heist drama about three autoworkers who steal from their corrupt union. In 1979 Ridley Scott cast Kotto in ‘Alien’ as space ship engineer Dennis Parker, “When I got that script I turned down movies for two years because I was afraid that movie would be produced and I'd be doing something else.” Following the film's success, Kotto turned down Irvin Kershner’s offer to appear in the Star Wars sequel ‘The Empire Strikes Back’ (1980) concerned he would become typecast by the sci-fi genre. 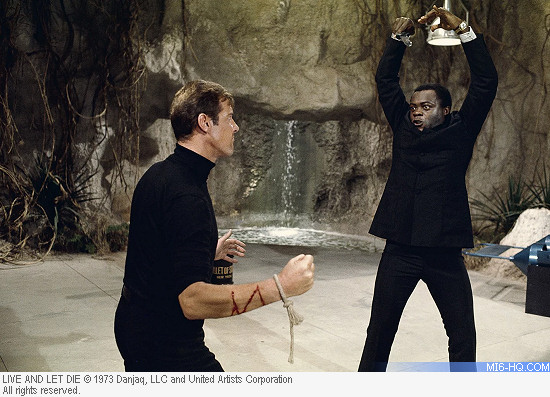 He retained a steady career throughout the 1980s. Kotto played a resistance fighter alongside Arnold Schwarzenegger in ‘Running Man’ (1987) and as an FBI officer in ‘Midnight Run’ starring Robert De Niro. Between 1993 and 1999 Kotto had a recurring role in ‘Homicide: Life on the Street’ appearing in 122 episodes over seven seasons. He also contributed to the series as a writer. Kotto effectively retired from the business at the end of the century. He published his memoirs in 1999 under the title, ‘The Royalty: A Spiritual Awakening’, in which he wrote his father, Avraham Kotto, descended from Edward VII. Buckingham Palace later denied his claim.

Despite certain grievances, Kotto enjoyed his association with the James Bond films and admitted his turn in 'Live And Let Die' changed his life, “I learnt how to buy clothes, how to dress, how to carry myself, I ate like James Bond. So that movie was an education in sophistication and etiquette to me. Coming from the hood, it turned me into a gentleman.” 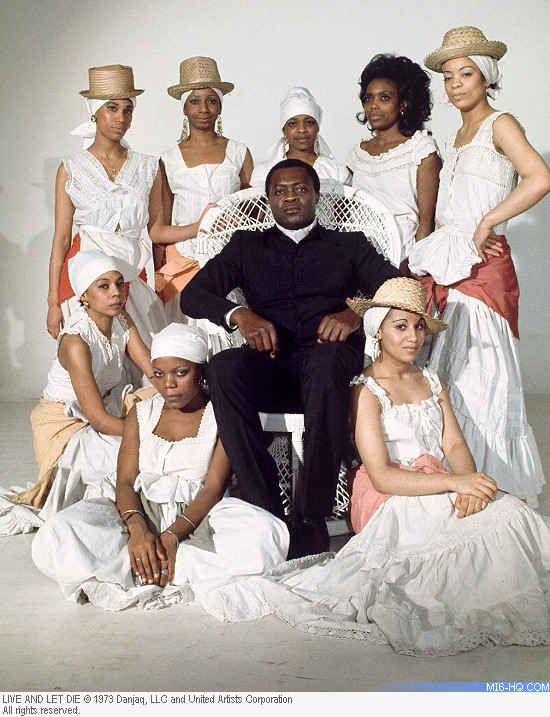 His wife, Tessie Sinahon, announced Kotto’s death on social media on March 15th, 2021 in the Philippines. He married three times and is survived by Sinahon and six children.